Our singular Daphne is in bloom this time of year producing a sensuous, heady musk.  Daphne is my garden’s Sacred Feminine, the goddess of  sensuality. Her blooms intoxicate, drawing me to my knees to inhale her rich scent.

There are a number of pheromone-rich plants in my garden, and lucky for me, they all flower at different times.  After the Daphne fades, the Jasmine comes to life.  You’ll find me in the side yard making up things to do for the weeks it remains in bloom.  The lavender revives in late spring, attracting bees all summer long.  It lines our front deck, and grows a few feet from our seating area.

According to Skin Biology, perfumes arose from plant oils with smells similar to animal pheromones. Plant oils with the strongest similarity to human sexual pheromones come from jasmine, ylang ylang and patchouli.

The sensual garden is a gentle lover. Leaves stir smoothly on an afternoon breeze as buds unfold languidly when ready. Bees swoop in, spreading garden goodness from plant to plant.

Without a quenching rain, my earthly companions must reach for ground water.  So far they’re holding their own. The garden wouldn’t be the same without them.

In color theory, yellow compliments purple. The colors are directly adjacent to one another on the color wheel, in the same way green is to red, and orange is to blue. Without consciously realizing it, I’ve complimented brilliant yellow sunflowers with purple Lavender, Ageratum and nearby Mexican Sage.

The sunflowers line the top of the deck, while the lavender shrubs grow in front. The fragrant flowers bump up against the steps, softening the hard edges. Lavender is one of my favorite plants. It blooms for months on end, with a distinctive scent, valued for its restorative and relaxing powers.  I dried a bunch of lavender in the garage, and used a few blossoms in my bath.  I’m dreaming up ways to share these powerful blooms this Christmas.

This week I planted Ageratum and Baby Tears in a moss bowl, added some LEGO® Brick furniture and called it a Fairy Garden. It wasn’t until I took a step back from the arrangement that I realized I had surrounded the sunflowers with purple goodness. I love the shape of the fluffy blooms, but I also delight in the little saucer shapes with the dotted edges just before.

Dominated by tall grass, the Dwarf Plumbago is easy to miss. It resides in the lower garden and to the right of the steps leading to the deck. Don’t you just love the red burst of seed pods in the center?

The magnificent Mexican Sage grows at the curb, in an otherwise unremarkable section of the sidewalk strip. The sage goes dormant around December, when we give it a hard prune, then resumes its show of color, spring through fall. It’s a popular plant with children on the block due to its soft, velvet-like flowers. The hummingbirds are also big fans, frequently tussling over the right of territory.

On the subject of territory, my sister Sharon “owns” the color purple. It’s been her favorite her entire life. Sharon, this one’s for you.

My longed-for “wall of sunflowers” is coming along nicely, but I’ve revised my description a bit.

Three sunflower seedlings survived the first planting but the squirrels pilfered the rest.  The second crop did much better after I engineered a screen saver, but the plants are shorter.  I thought they would catch up in height, but since they are also setting buds, I think they’ll remain vertically challenged.  So…here are my…sunflowers, minus the flowers.  They’ll be along shortly.

Dr. Teal’s has a wonderfully fragrant and oh so relaxing lavender bath salt, but it’s nearly seven dollars a bag.  I shop for generic brands of Epsom salt, half the price and equally effective for soaking sore, tired muscles.  That said, I long for the relaxing scent of lavender filling the steamy room.

So today I’m experimenting with my own dried lavender.  I took a few flower heads and gently pinched the flowers from the stem.  I tucked the flowers into a small organza bag I had on hand (available at most craft stores) and double knotted the ribbon at the top. 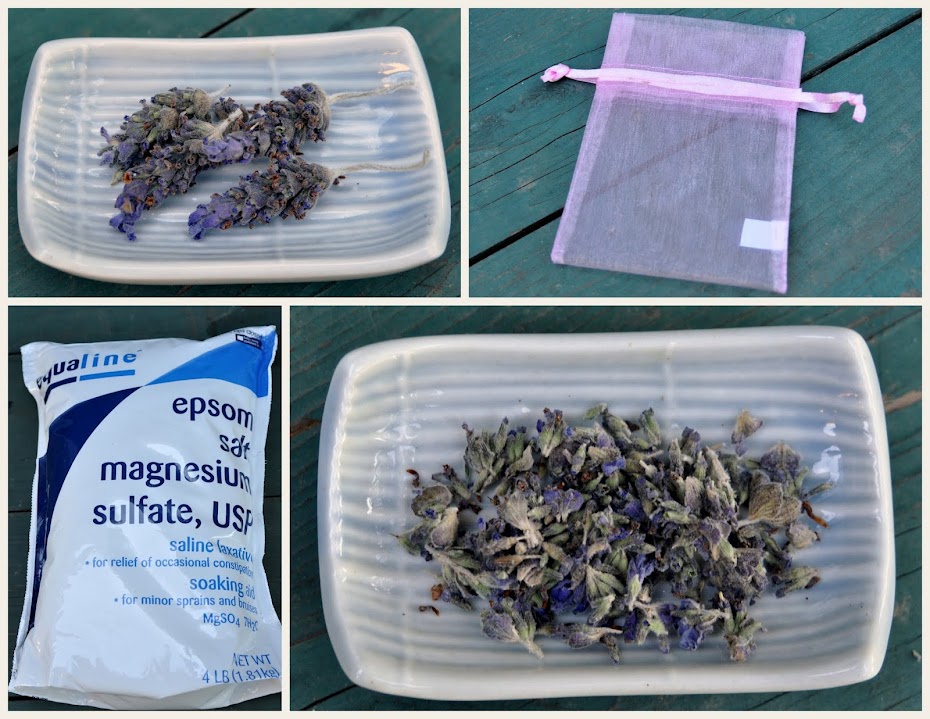 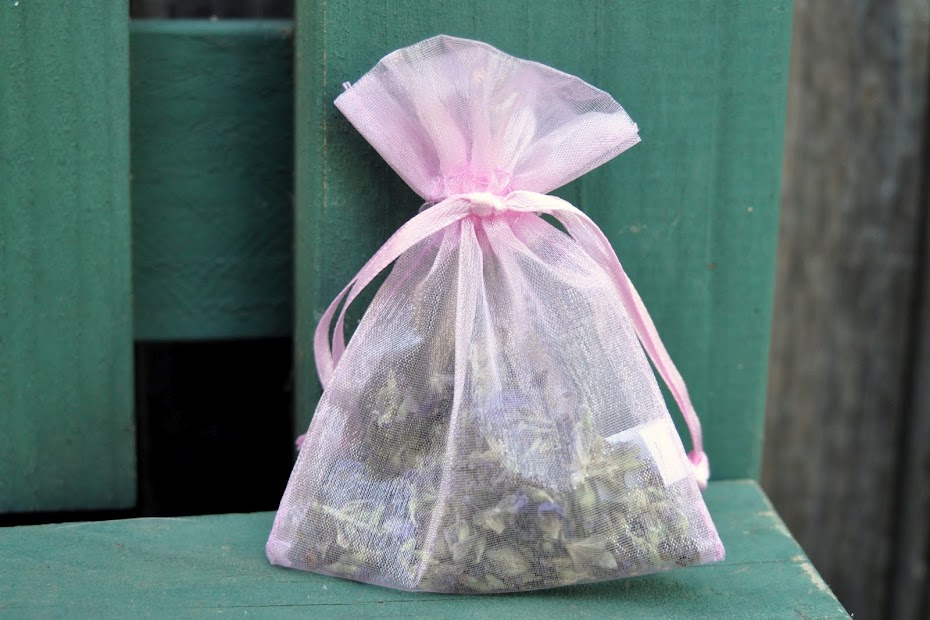 **A word of caution:  bath salts and oils can make the tub surfaces slick.  Use common sense care when getting in and out of the tub.

Happy spring!  Here’s what’s happening in my own little slice of garden paradise. 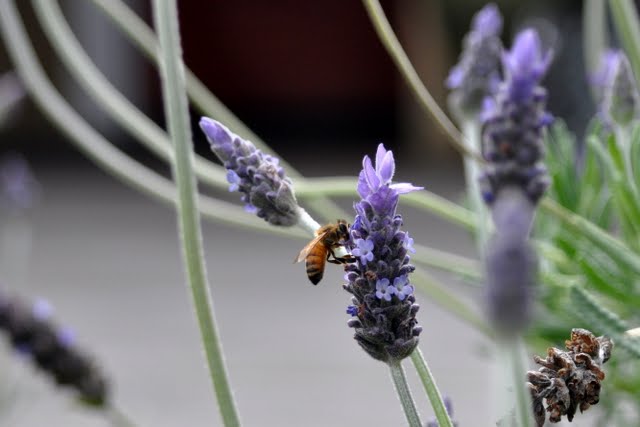 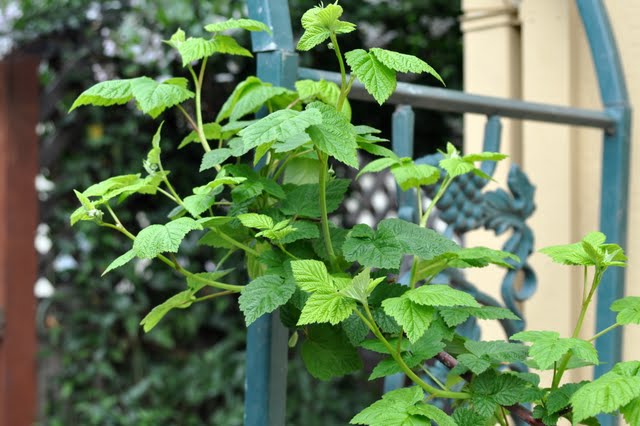 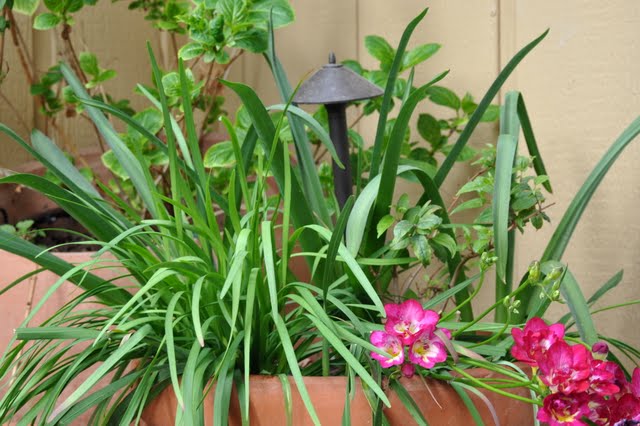 I love spring anywhere, but if I could choose I would always greet it in a garden. ~Ruth Stout 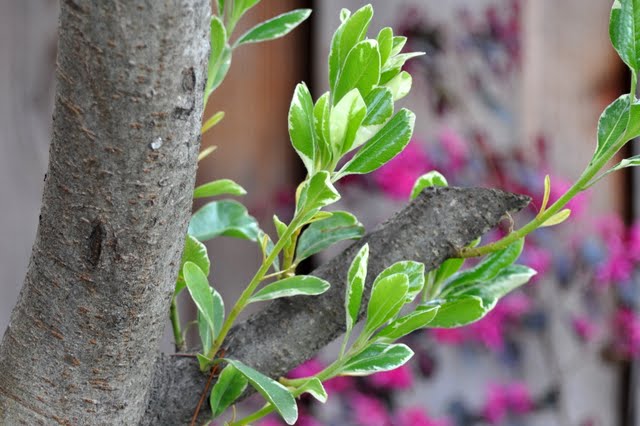 In the spring I have counted one hundred and thirty-six different kinds of weather inside of four and twenty hours. ~Mark Twain 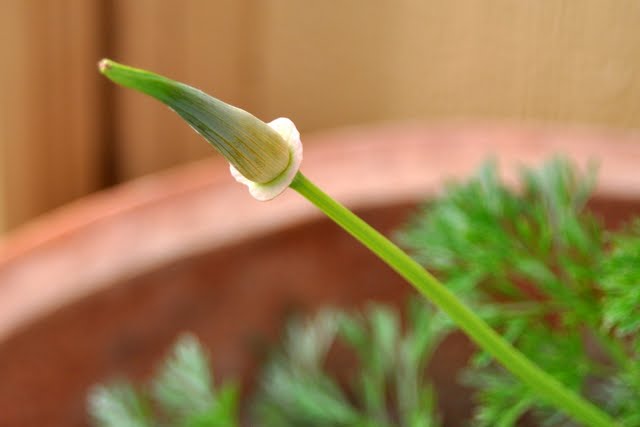 Spring is sooner recognized by plants than by men. ~Chinese Proverb 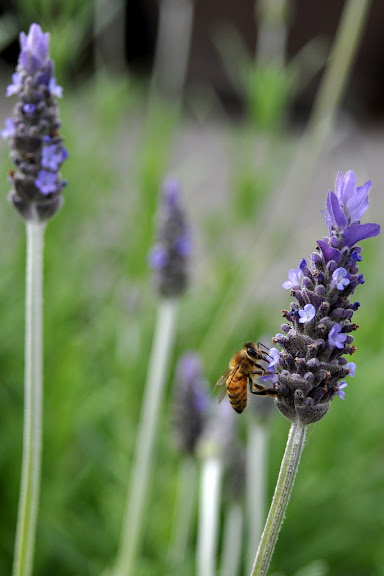 The Bees Arrive on Schedule

Learn more about the relaxing properties of lavender at The Hub

Provencal Lavender Field Maps (for that fantasy vacation to France)

Lavender in art: Watercolor on Etsy.com 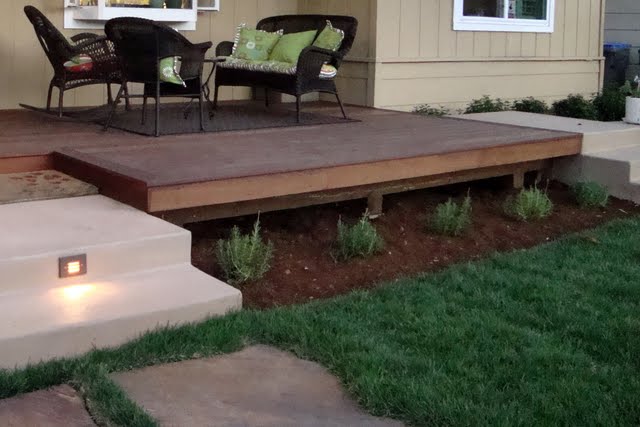 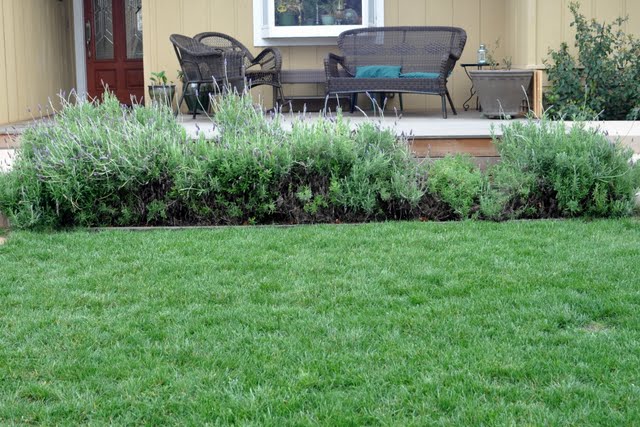 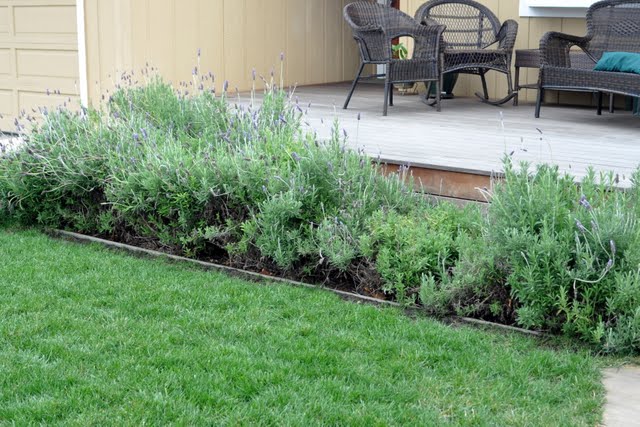