First, a retraction.  For the last few years I’ve been stuffing mesh apple bags with laundry lint, an offering for the neighborhood birds and squirrels.  I’m not sure where I originally found the idea or if I came up with it on my own.

I asked about the lint at a recent birding class, and they said that experts no longer recommend it. The owner of our local birding store said it compacts when wet.  According to this Humane Society article it ” crumbles, and it may contain harmful residues from detergents and fabric softeners.”  I use green products in the wash and don’t use a softener so I thought it was fine.  Now that I know better, I’m spreading the word.

Conversely, the birding store suggested offering animal fur.  This seemed  counter-intuitive to me since birds are cat’s prey, but I decided to give it a go.  Instead of tossing the cat fur collected in the brush, I’ve been tucking it into the trees in our garden. Would we have any takers?

The answer is yes, and today I got photographic proof.

With my camera in hand, I saw a bird lift out of the shrubs with something white in her mouth. Could it be?  I snapped from a distance, but couldn’t be sure till I looked at the picture close up.  Sure enough, this bird has a mouthful of Beijing’s fur.  Yeah!!!!

So to recap: Laundry lint is bad for nesting but animal fur is a hot commodity. My apologies for leading anyone astray.

I signed up for a banner-making class a few weeks ago at locally owned A Work of Heart.  They’re a mixed-media art studio, with the wonderful tag line: Where everyone is an artist.

I went for the Christmas banner, but  left with so much more.  I met the wonderful,  Lexi Grenzer of The Shabby Calavera.  She led the class at A Work of Heart and teaches additional classes at  Scrapbook Island.  We connected on Facebook where I spotted this ethereal watercolor.

My dad was a painter and my mom a great sketch artist, but that level of talent didn’t trickle down. We had plenty of watercolor paint sets growing up, but I never got any good at it.  I have great admiration for Lexi’s skill.

Lexi Grenzer is a teacher, jewelry designer and animal advocate in the Bay Area. She has a great love of all things Shabby Chic and Day of the Dead, which lead to the creation of her blog and business, The Shabby Calavera. Lexi’s days are spent creating in the studio, teaching classes, snuggling with her four fur babies and doting on her son and adoring husband. She attributes her love of art and hand crafted beauties to her Grandmother’s amazing influence.

So in addition to appreciating her art, I really appreciate her heart, and her contributions to our local Humane Society.

And the banner…here’s what me made in class:

I’m posting a series of articles featuring organizing around the holidays this week on my blog Organized at Heart. If the subject interests you, please go take a peak.

Our kitties are all set for Halloween. They’ve gone the simple route with their costumes, unlike yours truly who likes to complicate things. I managed to alter a pattern and cut the pieces to my dress this weekend, but with my husband traveling out of the country and my busier-than-usual work schedule, I’m down to the wire.  And speaking of wire, our wireless connection went down as soon as he left town.  Nothing makes me feel dumber than trying to trouble shoot modems, routers, wireless connections and the like.

I studied theater arts in college, with an emphasis in costume design, so it’s fun to dust off my sewing skills once a year.  Halloween is the perfect time of year.  So, I’m sticking to the things I do know (sewing and gardening) and through the magic of mobile phones, our internet is finally up and running.

With that wireless business behind me, I’m back to focusing on costumes.

First up, Mouse the Mighty. I know, I know, he’s not even my cat but try telling him that.  Here he is sporting his Inspector Clouseau costume.

My sweet Lindy is taking the softer approach. Here she dons a head full of strawberry plants for that special Strawberry Shortcake look.

Slinky Malinki is all dressed in black. She’s emulating the children’s story book of the same name: Slinky Malinki…

Beijing is a teenager, and a tired one at that. She’s sitting out the whole costume thing this year, preferring instead to monitor the treats. She’s a natural.

What’s in a name:

Mighty Mouse: He’s named by our neighbor’s daughter.
Lindy: She came home from the Humane Society already named. We also call her Lindy-Lu.
Slinky Malinki:  Once a stray. We named her after a slinky black cat in a children’s story book of the same name.
Beijing:  Also once a stray.  My son named her Beijing, because she’s neither white nor orange, but beige.

Chocolate pumpkin. This tasty morsel was a gift from my Pilates instructor. Yes, I do see the irony in this.

Lindy-Lu, our beloved black and white kitty, just turned ten. We adopted her seven years ago from our local Humane Society as a birthday gift for my oldest son. She’s been a gift to us all. 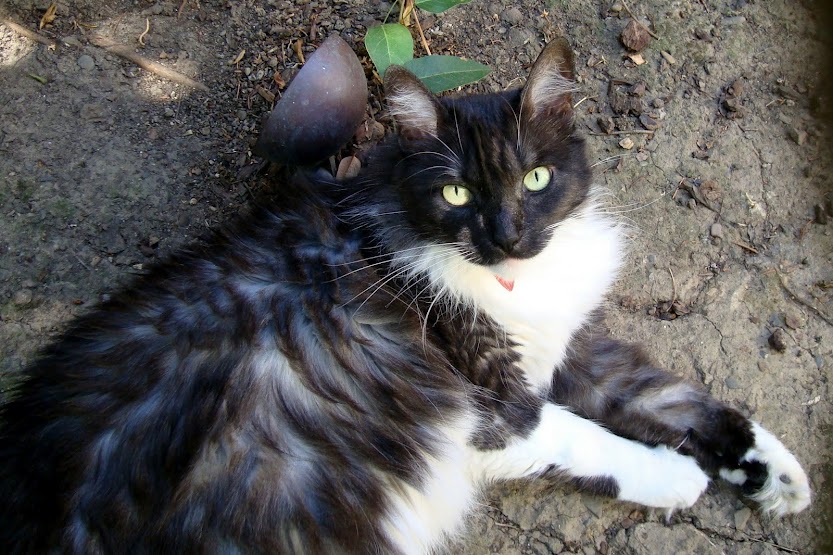 Our family looked at every single cat available for adoption that day, but in the end she chose us. She reached between the bars with her paw and patted my son.

Lindy is good-natured and outgoing and unlike most cats, she comes when called. She’s too big for our laps, preferring instead to lay across the back of the couch, nestling near our hair. The moment I head outside, she is by my side, following me from place to place. Mighty-Mouse, the neighbor’s kitty comes calling and wants to play. She’s receptive on occasion, but for the most part views him as an annoying little brother. At 16 pounds she could take him, but she prefers to give him a warning growl. Sometimes he actually takes the hint. 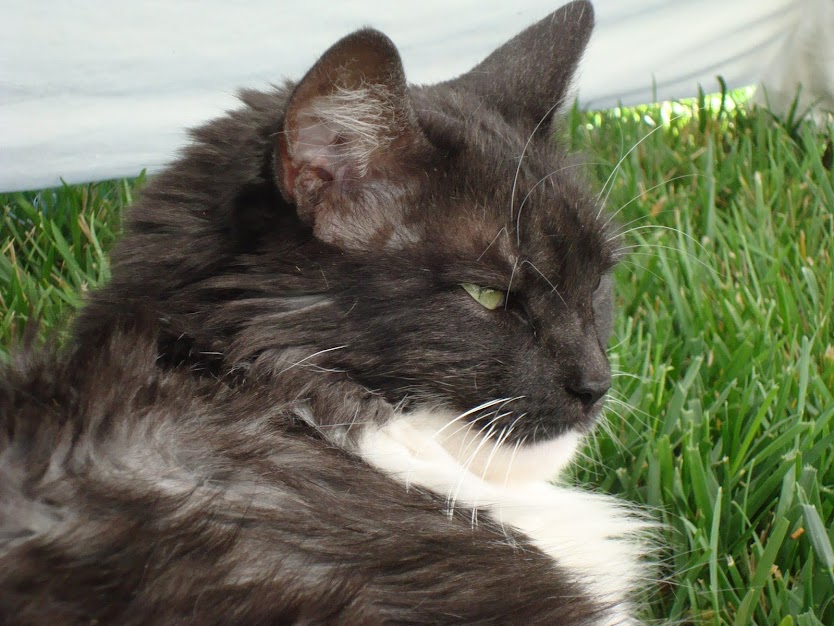 As I go about my gardening chores, she settles into the grass or between a couple of nearby shrubs. I often think she’s keeping an eye on me, offering her quiet companionship as she tucks in her paws and gives me the blink of acceptance. The garden wouldn’t be the same without her.

For all the time I spend in the garden, complete surprises are rare.  With my nose down close to the dirt, or my camera directed at flowers and trees, it feels as comfortable and familiar as a good marriage.

That said, my husband still surprises me with flowers “just because” and this week my garden did the same.  After an hour of planting and the requisite cleanup, I turned to go inside and spotted something flowering behind our fruit tree.  I climbed over the rock wall and shrubs, rounded the tree, and there it was!  The flowering bulb has roots under the fence line, so perhaps the bulb divided from the neighbor’s side.

It would be nice to think of the flower as a gift, or more appropriately a peace-offering, for in this community of otherwise incredible neighbors, this unhappy soul stands out.  He once trapped my cat and dropped him off at the Humane Society without a word.  He calls the authorities when someone’s dog barks.  He asked us to lie when our shared fence fell down and had to be replaced. We declined.

Perhaps this random gift is not the flower, but the opportunity to let go of the angst I feel when I pass his house.  All these years later the anger and hurt are gone, but the angst lingers on. 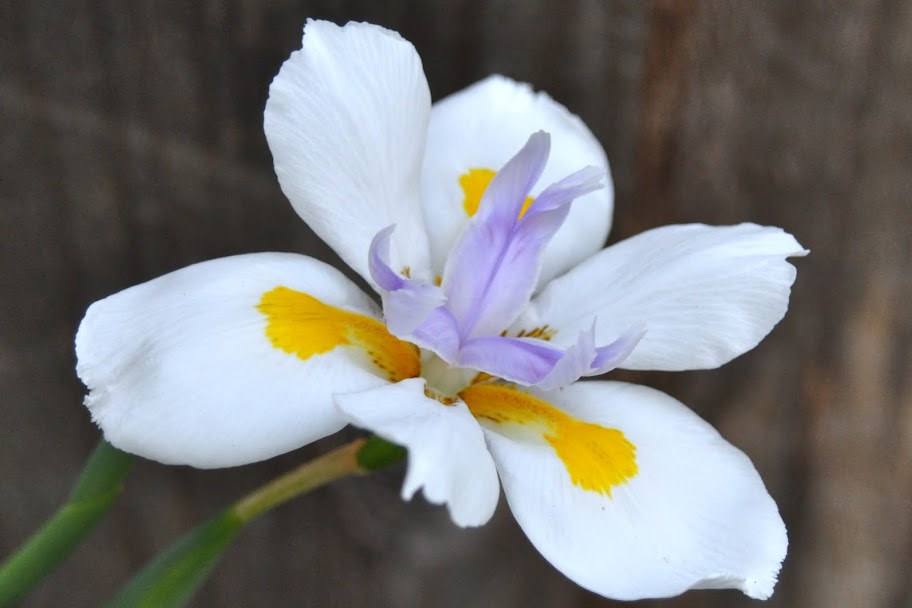 Any guesses on the name of this flowering bulb?

Over the years we’ve lost a number of cats to moving cars, Feline AIDS and wanderlust.  Others have endured abscesses from fights and other assorted injuries.  My cat Grant set the record for cats trapped in inappropriate places such as neighboring garages, attics and vacated townhouses.  I bailed him out of the Humane Society three times.   When we tried to convert him to an indoor kitty, he started (and continued) to spray the indoor perimeter of the house.  My husband constructed an outdoor cat run with a cat flap allowing him to come and go through a window, but he remained restless and bored. 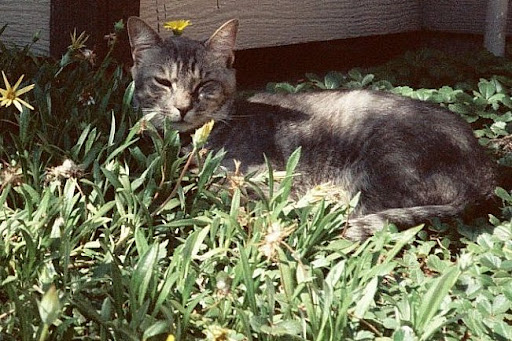 Then we discovered The Cat Fence-in System, developed by a company in Las Vegas.  I spent a weekend pruning vines and shrubs away from the fence line while my husband traveled out of country.  When he returned we added lattice to the fence to make it taller and installed the system. Sunday night we let the cats explore the yard so we could test for any flaws.  They tried climbing the fence a few times but were thwarted by the netting.  They quickly settled into a happier life as indoor/outdoor cats.

The system has been in place for nearly 15 years now, without a single escape.  The peace of mind has been such a gift:  No fights, no accidents, no communicable diseases.  It’s also a good-neighbor system:  if someone’s cat is digging up a flower bed or fighting at 2:00 am, I can rest assured it isn’t one of mine.

If you can keep your kitty happy indoors, go for it.  But if you love a rabble-rouser like Grant or a roamer like Estare, this CatFence-in System may by the perfect compromise.

Cat’s in the Garden 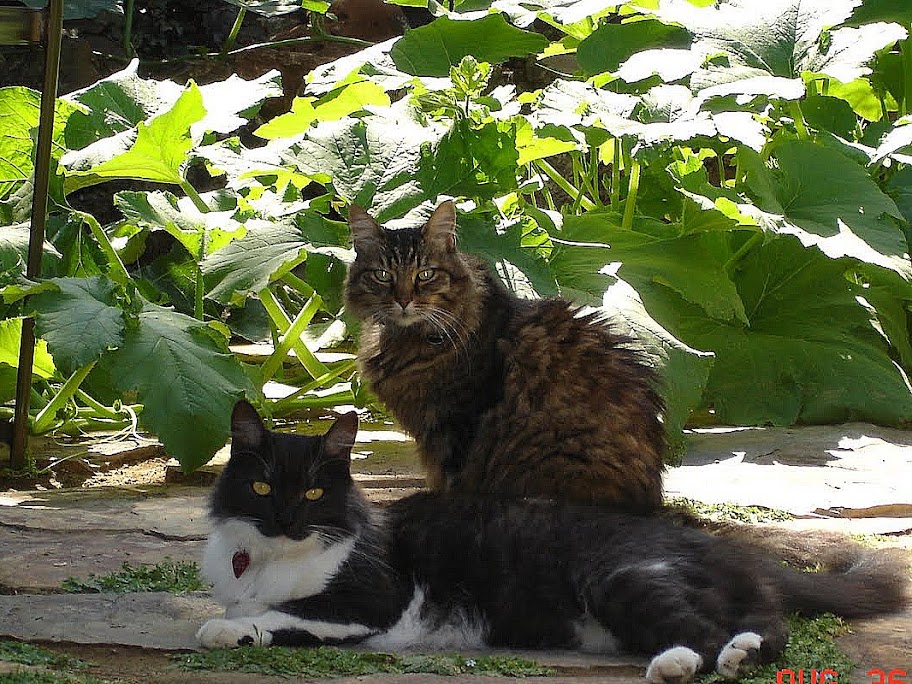 A Rare Moment of Togetherness 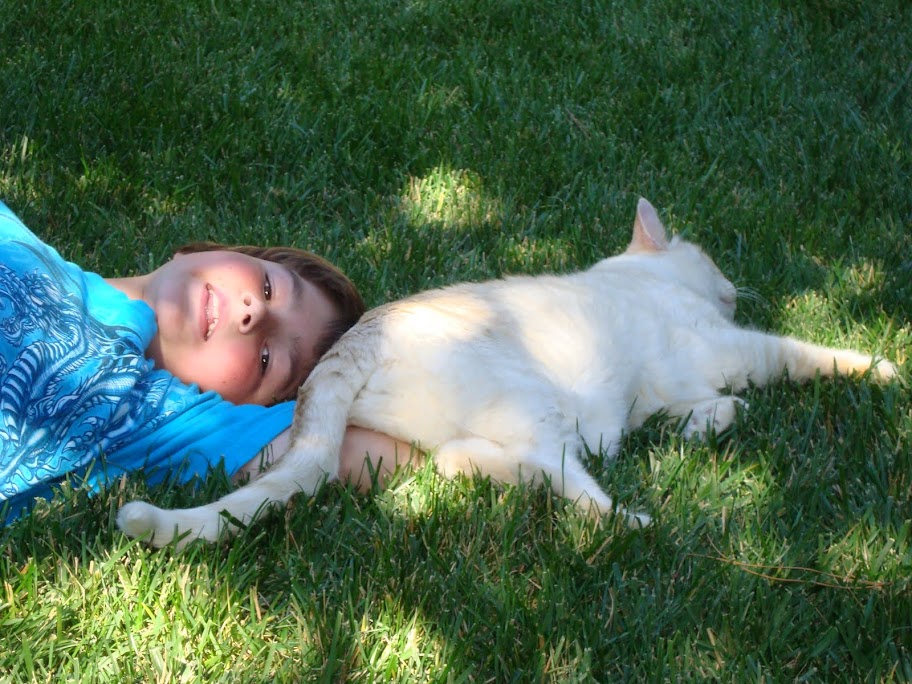 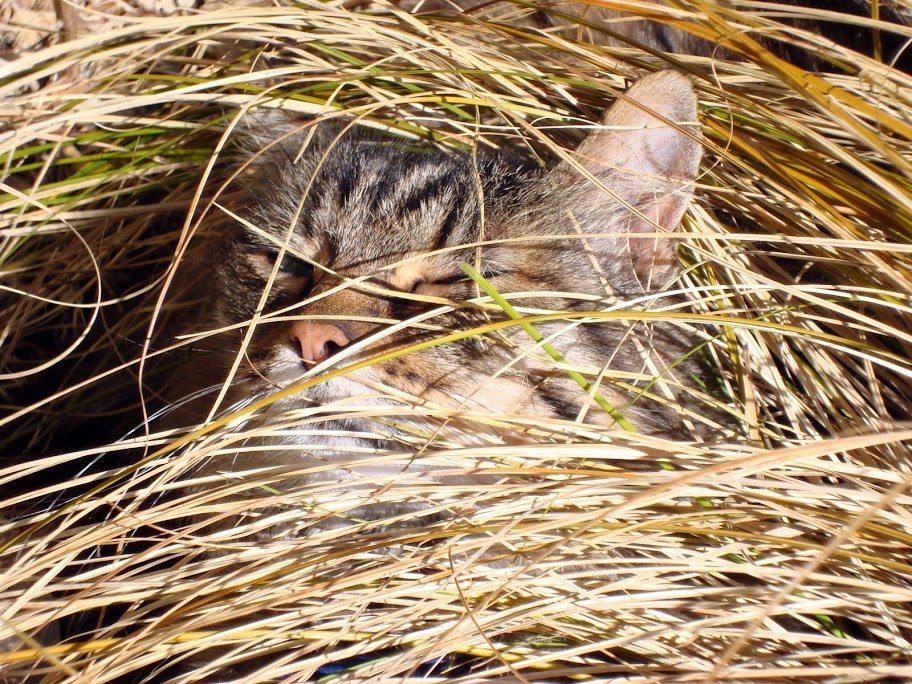