I’ve been working extra hours these past few weeks, so when my client called to cancel this morning, I was (mostly) relieved.  I decided to treat myself to a much-needed thirty minutes of goofing off.  I sat in a chair facing the garden, played a game on my phone and within minutes had a sleeping cat on my lap.

It wasn’t long before my eyes drifted out to the usual wildlife antics.  Foraging squirrels raced around the garden, so round and full I’m amazed they can still move.   It looked as though they were working as a team.  You don’t see that every day! It’s usually ‘every squirrel for themselves.’  The light grey squirrel moved across the lawn, into the shrubs and then used the camellia trellis like a ladder.  I should have jumped up for the camera then, but I was busy goofing off.  Right behind him was a dark, brown squirrel, following his every move. It looked like a game of follow the leader.

Just  outside the window, a small bird flew from branch to branch in the maple tree.  Then he turned and appeared to be looking in the window.  How could I ignore an invitation like that!?

Camera in hand, it was still incredibly challenging getting his picture.  He darted from branch to branch, up, down, back up.  Then he flew to the neighboring yard, and within minutes was back again.  Perhaps he could see his own reflection, though he never went for the window.*

I’ve decided he was keeping an eye on me, making sure I stuck to my goofing-off schedule before getting back to work.  Meanwhile, he was keeping plenty busy for both of us.

Are you taking some time to goof-off during this hectic season?

*It’s disheartening to hear a bird fly into a closed window. One theory is that the sky reflects in the glass, and to the bird thinks it can fly through. These clever decals Window Alert: Protect Your Songbirds act as a ‘stoplight’ for the birds.

I spotted this little lovely on the pansies this morning as I was sweeping the walkway. What a striking contrast against the purple flowers.

Initially, I thought it was a moth, but upon reading, it has the characteristics of a butterfly.  I’ve seen butterflies alight before, but this is the first time I saw one drink nectar from the flower.  How charming!

It’s a pleasure sweeping and raking pine needles after a storm, at least until the blisters form. Everything smells of nature’s musk.  There is nothing quite like it.  Do you think my little visitor agrees?

PJ’s Nectar Bar at The PyjamaGardener

Have you ever been told off by a squirrel? They’re not shy about letting you know how they feel.  They stand their ground, swishing their ample tails in a circular motion, while building a vocal crescendo. It starts with short, shrill bursts, almost a scream, then progresses to a long bark.  I’ve heard them telling each other off many a time, but today they directed it at me.  The only thing I wanted to take was a picture, but clearly he perceived a threat.

When I stepped outside there were three gray squirrels on the lawn, alternately burying peanuts and chasing each other away from their private stash. They scattered into the trees, then raced around and around the pine tree in what looked like a frenzied game of  chase.  Eventually they peeled off, one by one.  I thought they were gone.

Squirrel in the Pine Tree

One reappeared on the fence, with another peanut in his mouth and began his vocal tirade. I don’t know how he managed to make so much noise with his teeth clamped down around the peanut.

Our neighbors to the left feed the squirrels fistfuls of peanuts every day. The little rodents are so brazen, they’ll come in her back door and help themselves.

The gray squirrels in our area don’t hibernate due to the mild climate. But with the cooler weather, they ramp up their activity, squirreling away nuts and seeds all over our back yard. Clearly I was an impediment to that progress.

During the summer months, I found shells on the patio table and on the seat of one of our chairs. I rarely saw the squirrel in action, but apparently he stuffed his cheeks with the nuts, then sat down at my table to eat them. He left without bothering to clean up.

I think it’s time I shake my own ample tail to let him know what I think of his manners. 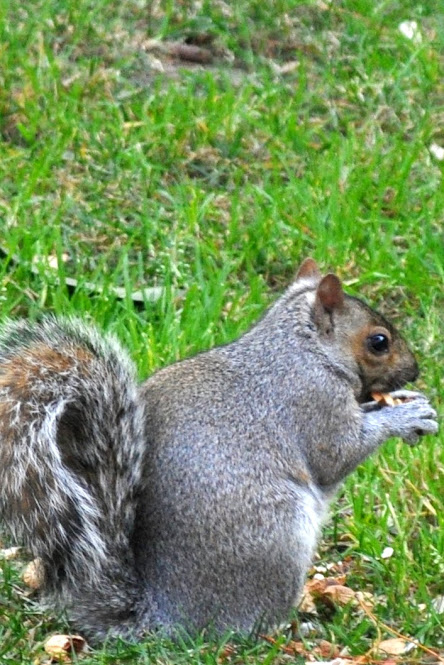 I photographed a nest last month, high up in the orange tree.  There was no sign of activity so I  assumed it belonged to a nocturnal mama, most likely an opossum.  This week, purely by chance, I looked up to see a squirrel enter the nest.  How I wished I had my camera!  I’m fascinated by what looks like a paper bag at the bottom of the nest.  I’ll have to dig out some binoculars so I can get a peek without getting any closer than I already have.  It’s such a compliment when nests appear in your garden.

According to A Squirrel Place, “Squirrels are usually born in the early spring. The average litter consists of four. This varies with climate and location.”

What have you seen nesting this spring? 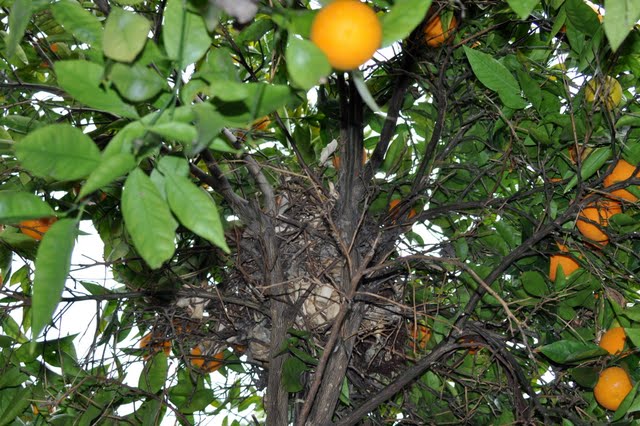 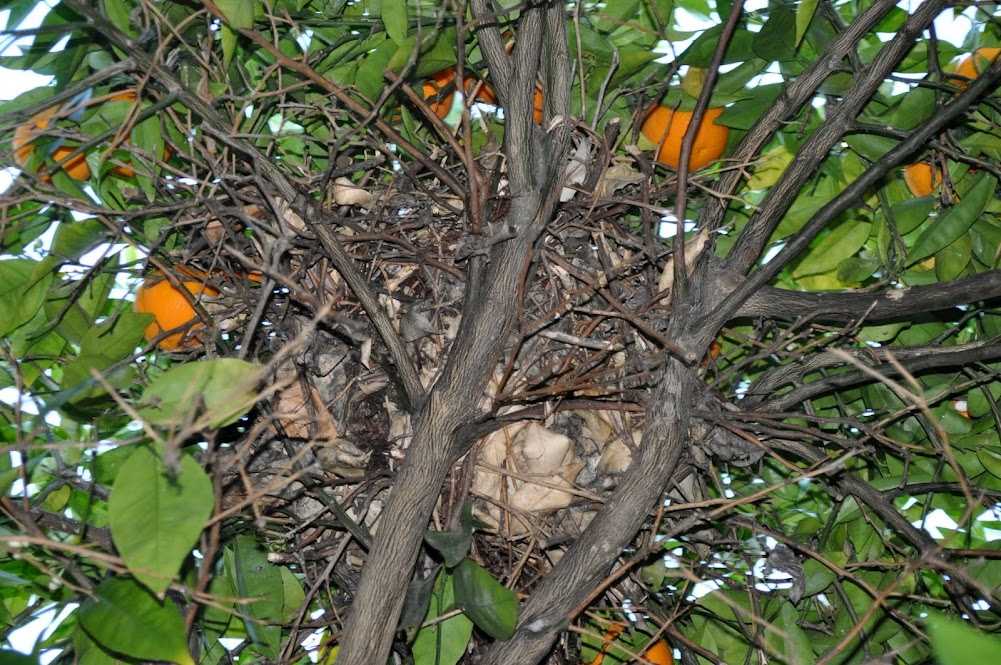