Thank you all for the fab birthday greetings!  I’m still basking in birthday glow! October is such a great month to get older. 😉

Check out the birthday card I received from my family. I’m wearing it!  It’s really a Halloween card, but knowing how much I love the season they usually buy me a Halloween card instead.

The inspiration for my costume this year is a birthday/Halloween card. Designer Bella Pilar has a line of whimsical cards, featuring fabulous and funky dresses  The spotted cat was a natural for me. It’s one of my all time favorite line of cards. Who says you can’t dress up like a greeting card?

Additions to the Fairy Garden

The fairies have been busy cheering up the “haunted” fairy garden.  They added a banner and a few pumpkins.  Things are looking a lot more festive.  They’re off collecting apples for an apple-bob.  They might be going for a hay ride through a cemetery later, too. I plan to add a few lights to welcome them back. Things are far less spooky with the lights on.

LEGOLAND’s® heart lies toward the center of the park, known as Mini-land USA. Meticulously detailed Lego models recreate, on a miniature scale, monuments, neighborhoods and landmarks. Mini-land brims with recreations of  New Orleans during Mardi Gras, the White House, complete with marching band on the lawn, Las Vegas and downtown San Francisco to name a few.   It’s amazing to see the creativity on display. Each scene captures the essence of the original, using lights, sound and movement, such as a cable car going up and down the hill in San Francisco or a fire crew rescuing a cat from a tree.  Mini-land is full of charm, appealing to all ages.  In recent years they’ve added a Star Wars series, with displays from various Star Wars movies. In addition to the fixed models, buildings are surrounded by miniaturized landscaping.

If you look closely at the photo below, the trees are actually small plants, pruned and shaped to look like pines and spruce.  The red barn and green house are built entirely from Lego bricks.  They stand about eight inches tall. 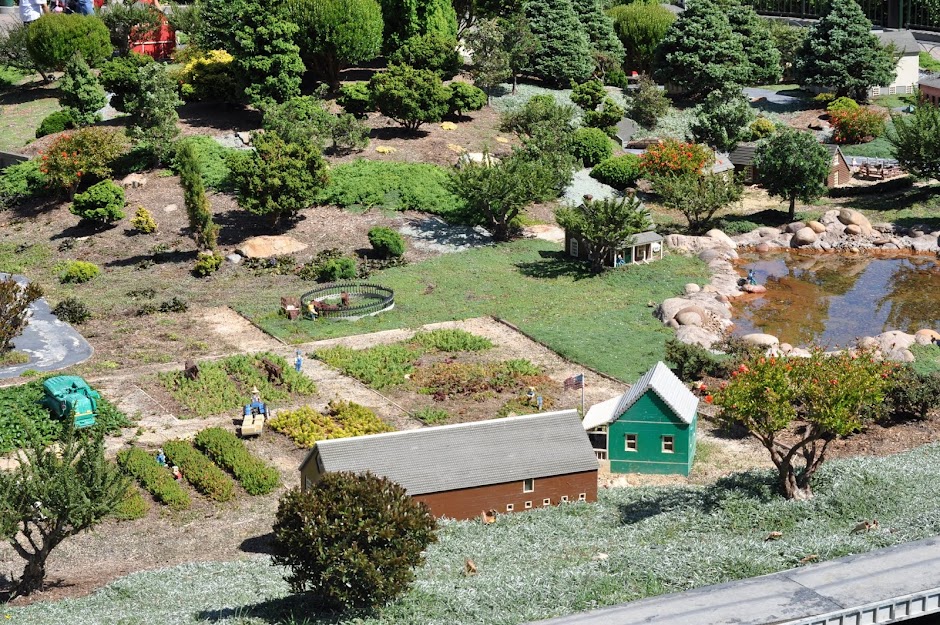 Three years ago, LEGOLAND added a water park and a small aquarium. The current Sea Life Aquarium exhibit featuring crabs and other crustaceans.  The tanks were breathtaking, with an eye toward beautiful design and sea life preservation.  It’s small and intimate, a nice way to start the day.

We spent the rest of the day at the Water Park.  Cameras safely locked away, we donned bathing suits and floated anonymously on individual rafts along the Build-a-Raft-River. The water was warm and relaxing.  We shook things up by careening down the Orange Rush in a family raft.  My son talked us into a turn on the water roller coaster, a ride culminating with a steep plunge into a wall of water.  To say we were soaked is an understatement.

Trivia for the day: LEGO started in Denmark in 1932. LEGO comes from the word “Leg Godt” which means “play well.”