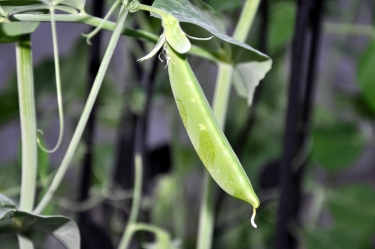 First of the garden peas

We grew up eating peas, both fresh and canned. We loved them. When we moved to the States, it stunned our classmates to see my sister and me eating them from our lunch tray at school. Looking back, I don’t remember anything really delicious arriving on a school lunch tray but somehow those peas were edible, at least to us.

Kids would scoop there peas on to our trays and dare us to eat them. It was a nifty party trick. I don’t have many positive memories of lunch at school, but I do remember eating the offered peas and enjoying the attention that came with it.

Now I’m growing my own peas. Straight from the vine, they’ll be fresh and crisp.  Inside is the hidden treasure: a row of nature’s green pearls. 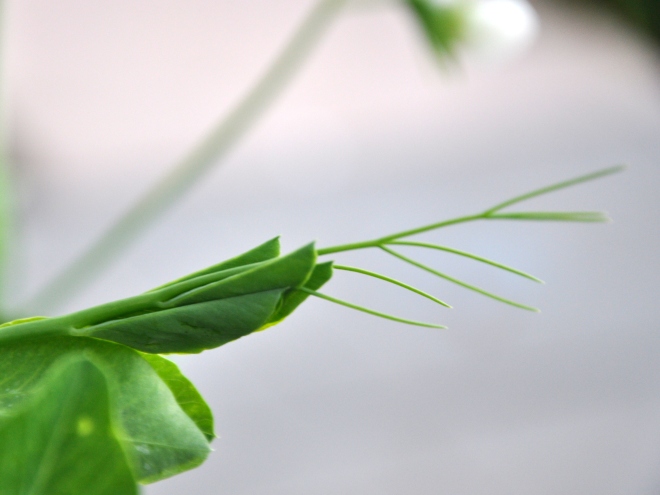 Although I’ve always known that peas were good for you*, I didn’t know they were also good for the environment.  According to The Worlds Healthiest Foods:

Peas belong to a category of crops called “nitrogen-fixing” crops. With the help of bacteria in the soil, peas and other pulse crops are able to take nitrogen gas from the air and convert it into more complex and usable forms. This process increases nitrogen available in the soil without the need for added fertilizer. Peas also have a relatively shallow root system which can help prevent erosion of the soil, and once the peas have been picked, the plant remainders tend to break down relatively easily for soil replenishment. Finally, rotation of peas with other crops has been shown to lower the risk of pest problems. These environmentally friendly aspects of pea production add to their desirability as a regular part of our diet. – Source WHFoods.org

Pretty flowers give way to legumes

Apparently peas aren’t good for everyone. Peas contain naturally occurring substances called purines.  Taken in excess they can cause health problems in people with gout or kidney stones.  The purine converts to uric acid.  They suggest limiting any high purine-containing foods such as green peas. Who knew?  You can find the complete article here.