The pumpkin vines are looking a bit tired and who can blame them?  They’ve been producing lemony-yellow flowers, luxurious vines and fruit since April.

Pumpkins are usually a 90 day crop, so clearly they’re past their prime.  Guess what?  I found two, beautifully formed yellow fruits, basking in the late-season heat.

I also found pumpkin pests.  Are you sensing a theme here?

Pumpkin pests come in all colors and sizes 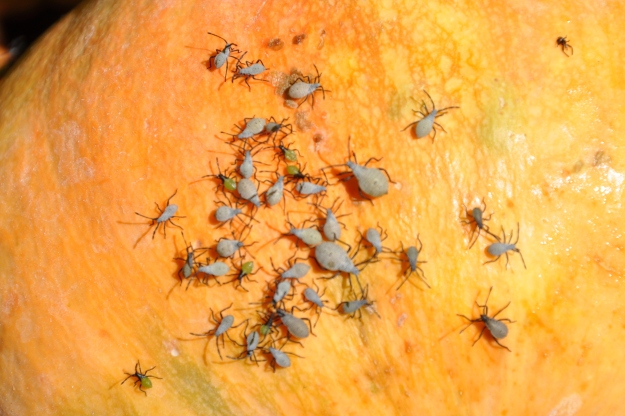 Harvest now, before it is too late!!!

I’ve seen these little grey creepers before, but they came late in the season and didn’t seem to hurt the pumpkins. I’ve not been so lucky this year. Since two of the smaller pumpkins were already collapsing, I decided to leave them there, thinking the pests would leave the hardier pumpkins alone.

Within a few days I found them on my biggest pumpkin, so I decided then and there to harvest the one large fruit. I twisted the pumpkin from the vine, and set it out-of-the-way on the path. When I went back to get it and bring it in the house, I failed to give it the respect it deserved. Ms. Overachiever here tucked the pumpkin under one arm, the kitchen scrap bin under the other and,  if you were reading last Friday, you know what happened.

Anyhoo…I’ll be sure to include this one in my 31 days of pumpkins in October.

Now, about those pests…

Andrea Meyers identifies these as Squash Bugs (aka Stink Bugs).  You can read more on her beautiful site.