No thanks to the kitties of the house, my first attempt at a winter crop failed miserably.  I didn’t cover the box in time, so they all assumed it was a nice, big, fresh litter box.  They were mistaken.

By the time I realized what was going on, I had to start over. Feline waste and vegetables are not a good mix. Rabbits, cows or any other herbivorous animal, yes. Carnivores, no.

So, back to the garden center for me. Since time marched on, I went with cell packs instead of seeds the second time and limited the crop to cauliflower and broccoli. Once planted, I surrounded the boxes with heavy-duty wire to discourage cats and squirrels alike.  It worked!

Imagine my surprise this week when a vibrant red radish appeared at the soil line. One seed survived (two if you count its tiny neighbor). We have a crisp and peppery addition to our next salad. 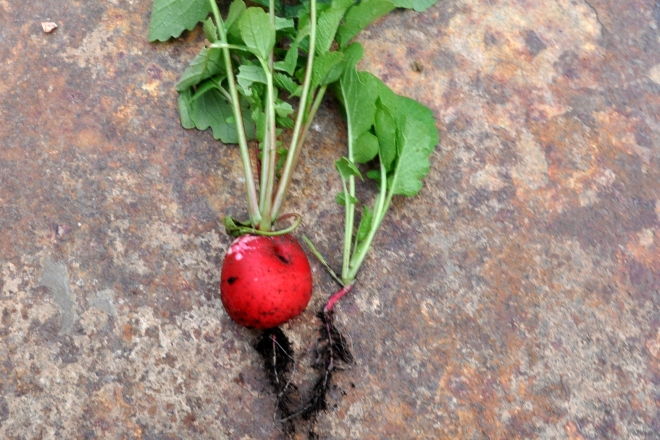 Survival of the Fittest

9 thoughts on “The Lone Radish”