Sure, I made a big fuss yesterday about our great pumpkins, but we love all of them.  How could you not delight in the uniqueness of each one?

The larger pumpkins have peach-colored shells with a flame orange skin just below the surface.  The rest of the pumpkins took on a more traditional color and grew to about half the weight. 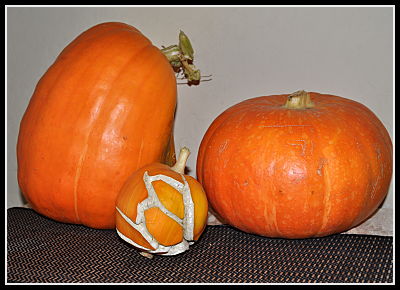 The pumpkin, below, is smooth and typically formed on one side, but something went wrong somewhere along the way. It already looks like it has two eyes and a mouth. No carving necessary.

We won’t need to carve this one. It’s already wearing a mask.

One of the earliest pumpkins started in an acorn shape. As it grew in size, the small scar opened up, leaving the insides exposed. Although it continued to turn orange, the rotting process started the minute it was off the vine. Then an amazing thing happened. I left it in the corner of the deck, figuring one of the night critters would simple eat it. Instead, the pumpkin warmed in the sun, creating enough moisture for the seeds to sprout. I tore it open, thinking I would compost the rotting skin, only to find a handful of seedlings.

Rounding out the eclectic group of pumpkins, this little fella survived the expanding girth of one of the greats. When I pulled away the 50-pound pumpkin, this was growing just below.

My guess? The weight of the growing pumpkin slowly split the sides of this one, giving it time to scar over as it continued to grow. Unlike the cousin above, it’s completely healed over.

We have about five pumpkins yet to harvest, still yellow or green. We’ll see what nature has in store.

10 thoughts on “The Other Pumpkins”