Did you know that pumpkins have been around since 7000 BCE?  Now *that* is something old.  Something new is planting out pumpkin seeds in EarthBoxes® on our front deck.  Most years, the pumpkins start out in the raised beds out back.  Unfortunately, the nasty squash bugs from last season wintered over, so I needed a ‘plan b’.  One of my readers suggested a decoy plant in the usual place so I did just that.  It’s growing so nicely though, that I fear I’ll be just as heartbroken if the nasty bugs take hold.

We’ve been growing pumpkins for a decade, mostly for carving and decorating. We’re all fans of Halloween around here, so nothing could be finer than a Jack o’lantern carved from a garden gourd.

Meanwhile, the pumpkins on deck are thriving.  We set up trellises this weekend so the pumpkins can climb up and over. I thinned the plants (always tough for me) so that the others would have room to grow.   I planted three varieties  from seed six weeks ago today, which means they’re already half way through the 90 day growing season.  Isn’t that amazing?

There are a plethora of buds, with the first few male flowers appearing this week.

The females will bud next, then it’s up to the bees to cross-pollinate.

To help things along, Salvia and Sunflowers are growing nearby. They’re all bee magnets, so a good time will be had by all.

Please check back soon to see the pumpkins progress. Meanwhile, if you run into a squash bug, please DO NOT offer directions to our place. The pumpkins thank you.

Our temperatures finally dropped to a cool 60 degrees ( 16 C), and the skies are cloudy and menacing. The changes in weather lend an air of authenticity to All Hallows’ Eve. I’m happy for it.

If you celebrate Halloween, I wish you a happy haunting, sumptuous (zero-calorie) goodies, and spooky Jack o’ lantern to light the way.

I’ve had great fun growing, harvesting and displaying our pumpkins.  It’s been interesting peering inside the pumpkins that grew all summer long.  I enjoy seeing what’s been growing inside. One set of seeds has an orange/brown tinge with a white stripe around the edges.  The others are white, but vary in size.  It’s also been interesting to see the undeveloped seeds.  They’re pale and thin, instead of plump like the others.

I’ve enjoyed counting down with you throughout the month.  In case you missed a few, here is the entire collection.  Happy Halloween!!! 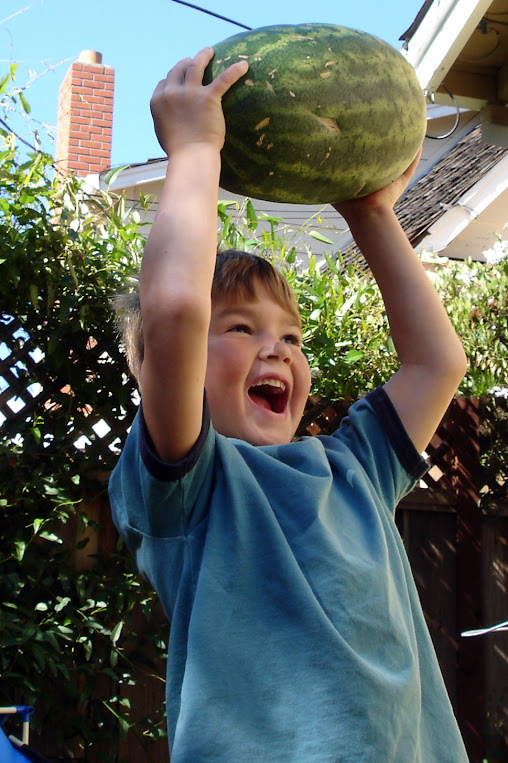 My cheerful, insightful, smart and creative son turns 12 today.  As an infant we joked that he was born with the “happy gene” as he soaked up his surroundings with a positive, mellow and inquisitive outlook.  His tantrums were few, even at two.  When he fell, his cries lasted a few seconds.  My son was joy, personified.

As it turns out, he was also born with the “gardening gene.”  Sure he liked the toy aisle at Target, but the seeds were his favorite.   We came home with many a packet of sunflower, pumpkin and carrot seeds, full of optimism and good spirit.  His grandfather would be proud.  During the Santa years, I mail-ordered his pumpkin seeds so they looked just a little different from the seeds we bought in town.  The jig is up, but the pumpkin-seeds-in-the stocking tradition lives on.

Here are a few pics of my joyful gardener over the years. 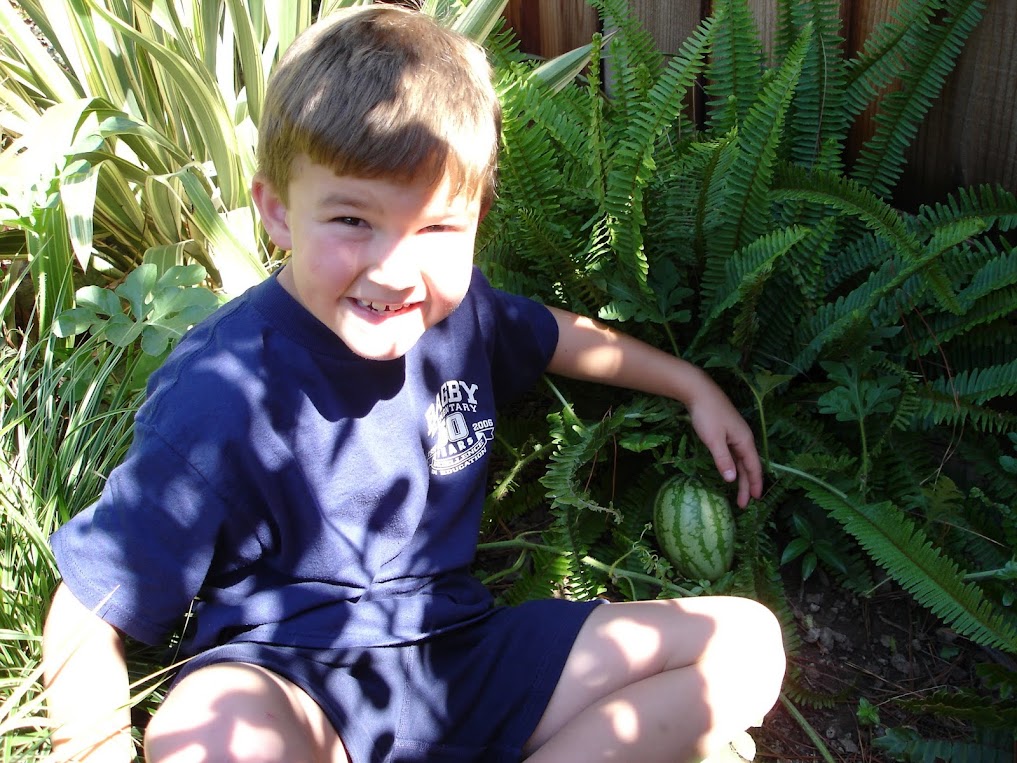 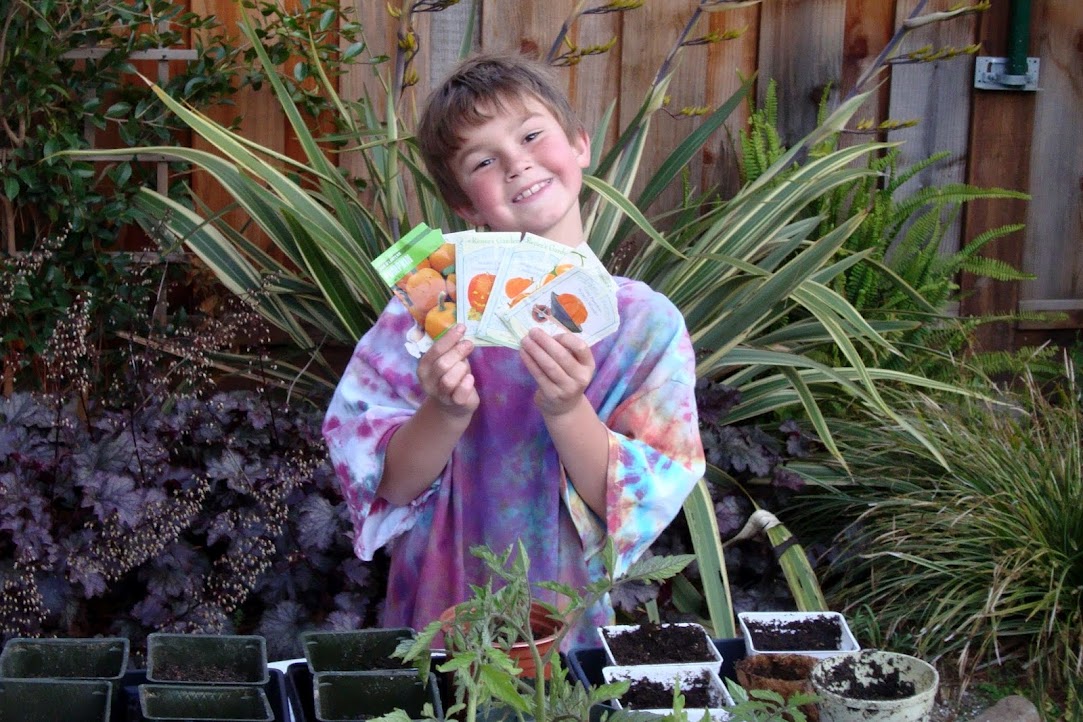 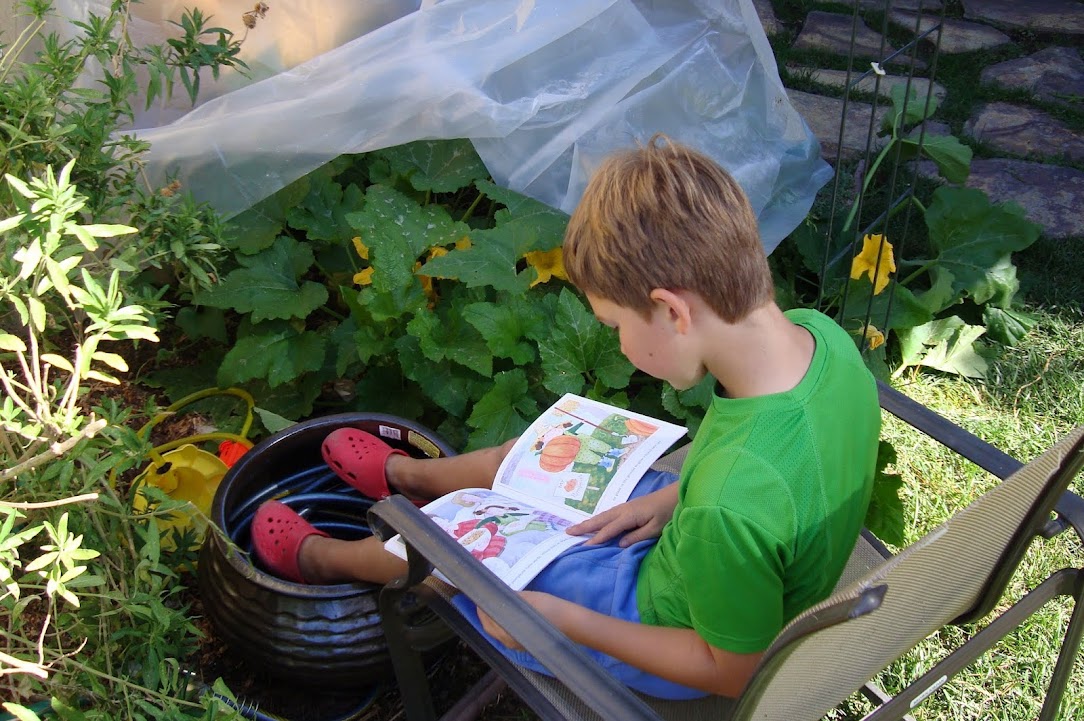 Reading to his pumpkin plants to help them grow 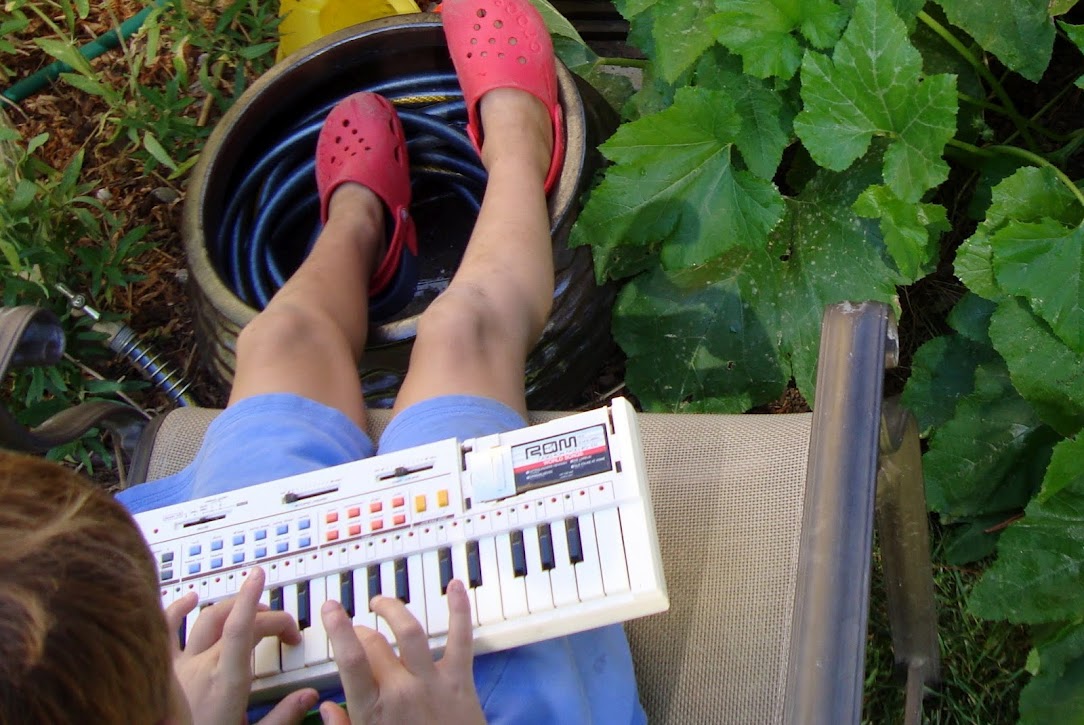 A little music never hurts either 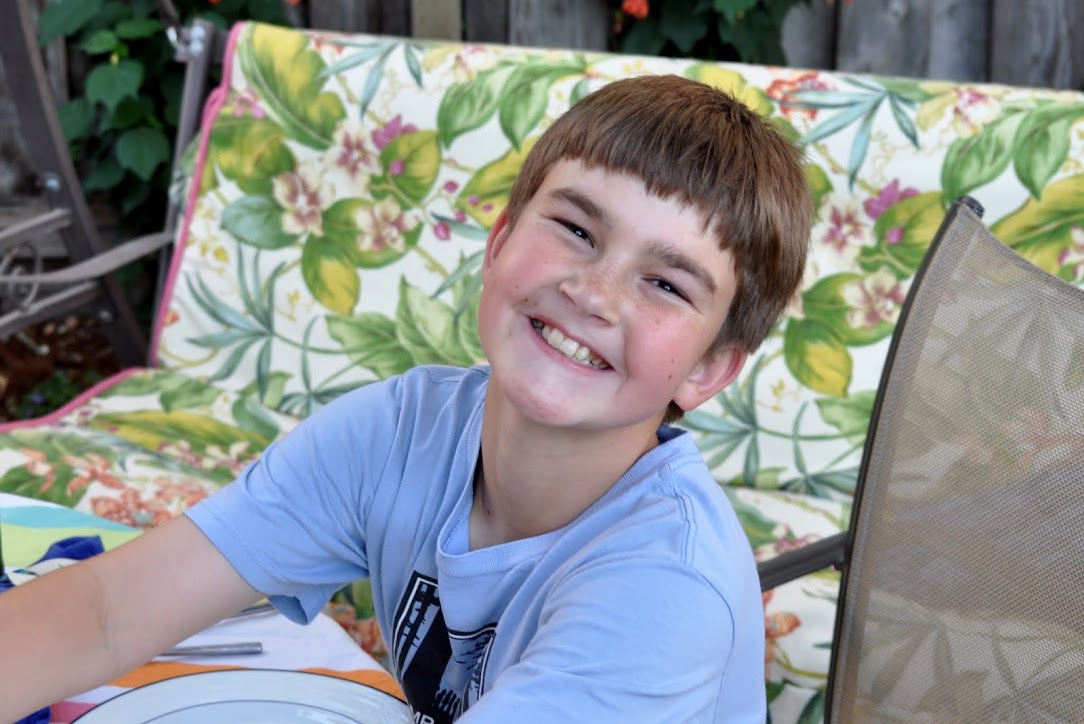 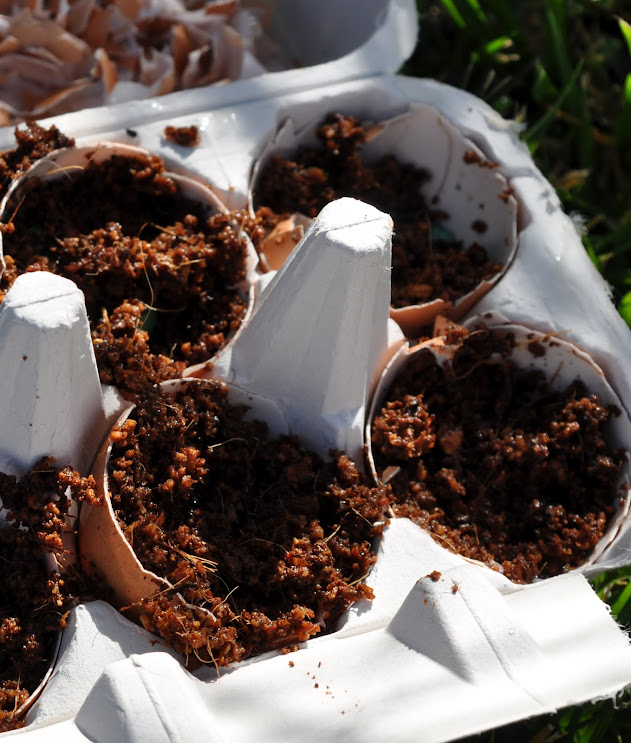 While mixing up a batch of pancakes this morning, I remembered a recent post on Facebook suggesting starting seeds in eggshells. I had leftover planting mix on the counter from planting cat grass the night before and a pile of eggshells collecting near the stove.

After rinsing the shells, I placed the rounded end back into the carton and added the mix. I planted several of the remaining pumpkin seeds, making it an even dozen. Next week, I’ll pop the seeds in their eggshell containers directly into the raised beds outdoors. The eggs decompose, adding nutrients to the soil. I crushed the remaining shells into smaller pieces as an offering for the birds. Apparently backyard birds will eat the shell as a source of calcium.

I love the narrative I found inside the egg carton. It says:

“Thank you for choosing our eggs.  These eggs were produced on small Amish/Mennonite, family farms where the traditions of being a good steward of the land are passed on from generation to generation.  In many cases the eggs are gathered by hand and much of the family is involved in the care of the birds and the collection of the eggs.  You can be assured that the eggs you are buying come from chickens that are allowed to roam freely about the hen house are given access to the outdoors and eat only certified organic feed.” – Farmers™ Hen House Organic 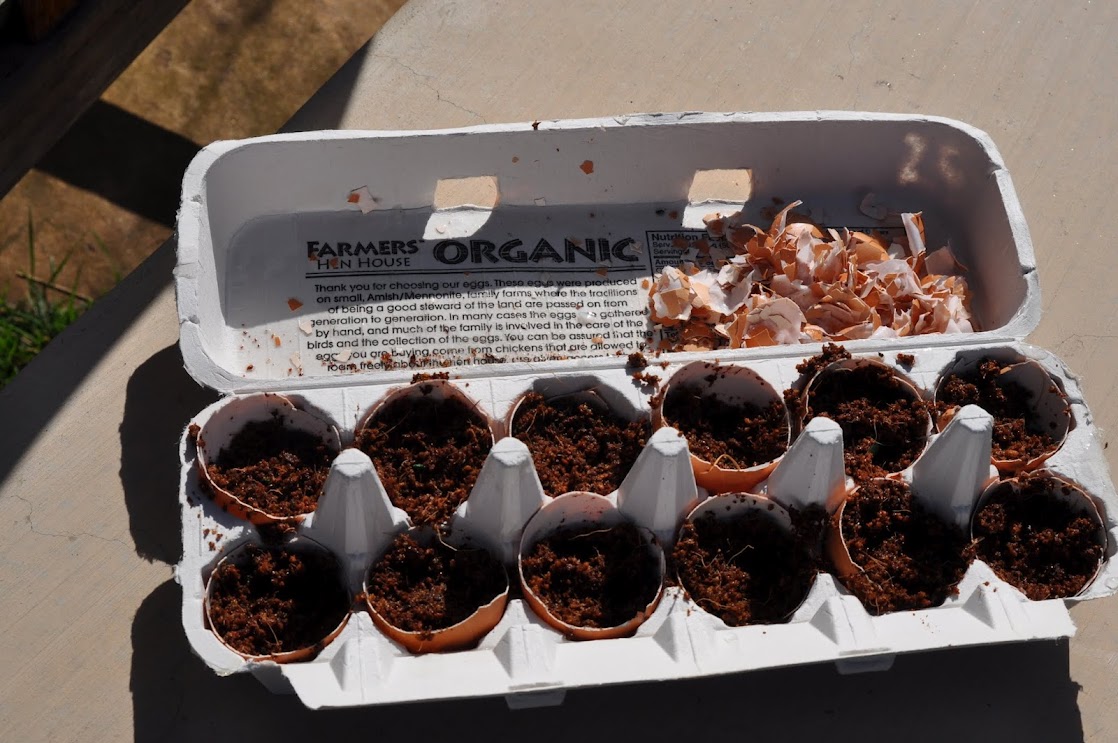 Cheaper by the Dozen

Here is a quick tutorial from Apartment Therapy. 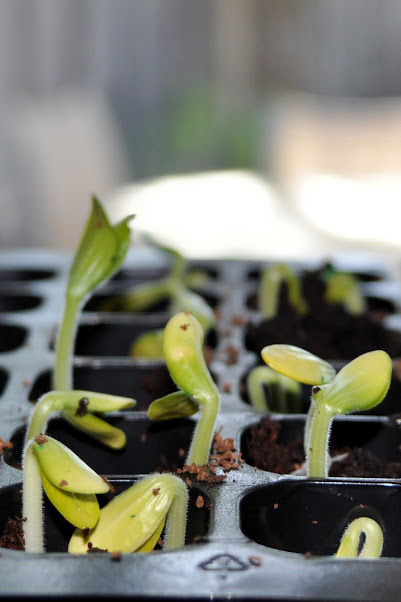 The pumpkin seeds are sprouting.  Yippee!  They look so hearty and healthy.  I prepared the beds last week with fresh amended soil.  We had success with bat guano fertilizer last year, so I’ll use that again this season.  One application did the trick.

We live close to Half Moon Bay, California, home of the World Championship Pumpkin Weigh-Off.  The event attracts growers from around the United States.  We fantasize each year about growing “a big one” but in reality we’re just happy when they grow into whole fruit without sacrificing too many to the rats and squirrels.

I love this time of year! 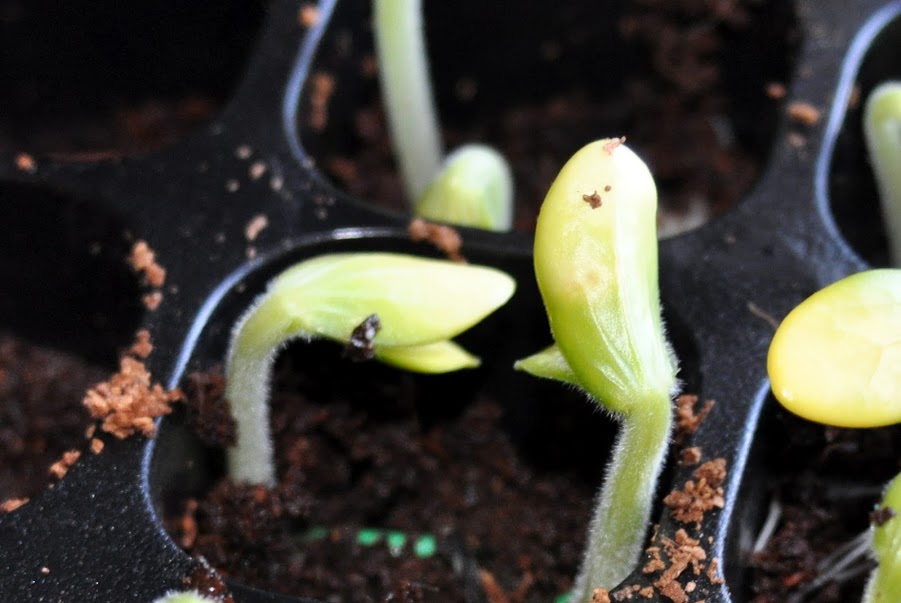 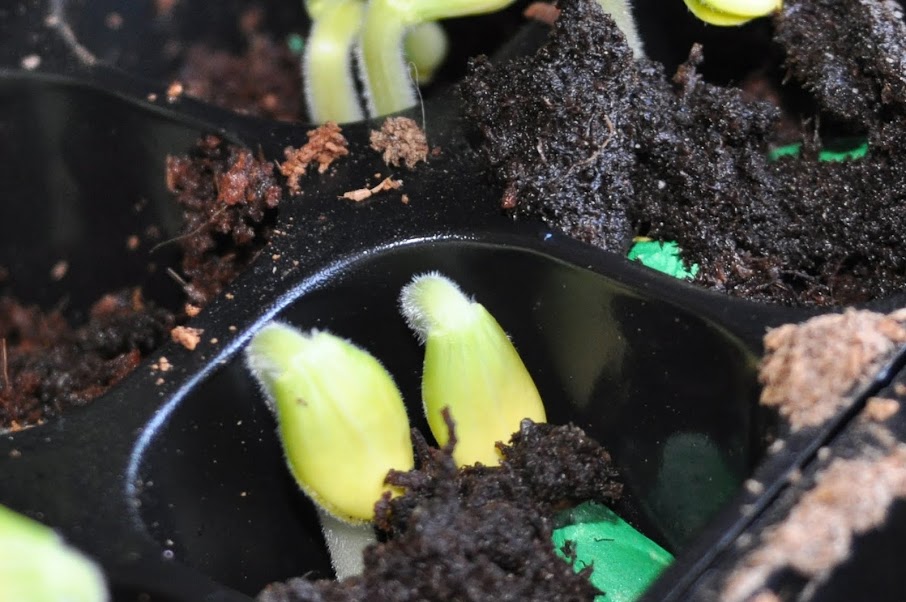 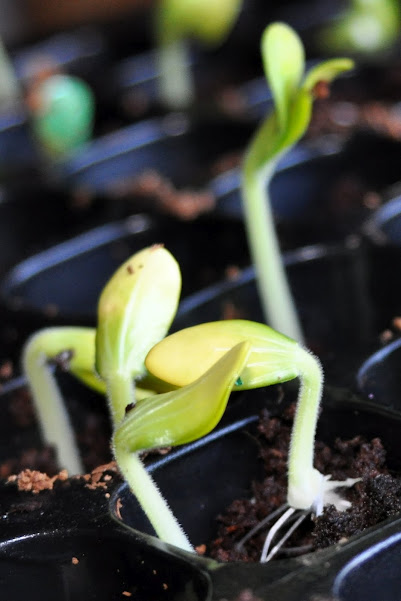 Let me take a look under the hood... 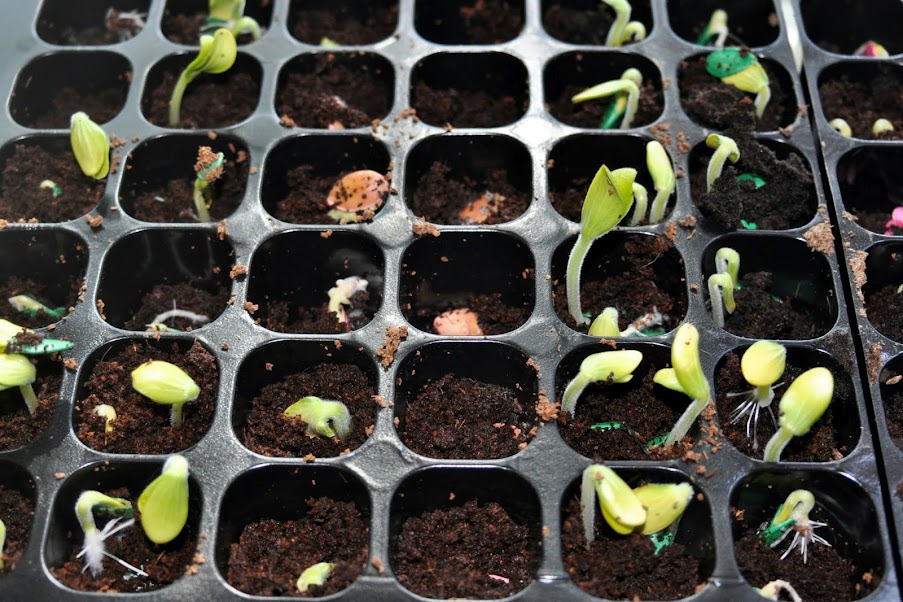