Imagine my surprise when this orchid rebloomed.

Phalaenopsis also is known as a moth plant

Sure, in theory, they re-bloom, but that’s not been my experience. I received this orchid as a gift in November 2016.  I’ve been lulled into purchasing one or two over the years, but they’re pricey and usually end the same way.

Orchids are gorgeous when in bloom, and they don’t require much fuss. Eventually, like all flowering plants, the blooms drop away. What’s left is a small set of shiny green leaves. They look nice for a while, but apparently, I neglect them and the leaves fall off one by one. I’m left with compost-filler and a small, empty pot. 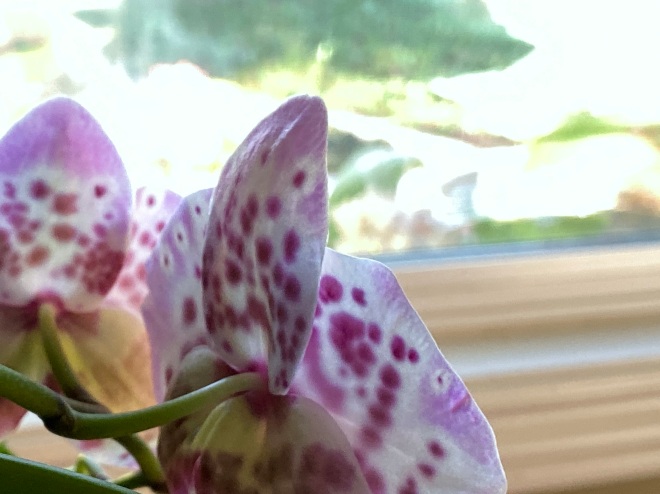 Light filtering through the Phalaenopsis bloom

I don’t mind admitting that its a bit guilt-inducing when you lose a house plant. I have my green thumb reputation to uphold! It was ridiculously validating to round the corner behind my couch last November and find my orchid in bloom, three years after the plant moved in. Furthermore, it continued to bloom well into February of this year. February! 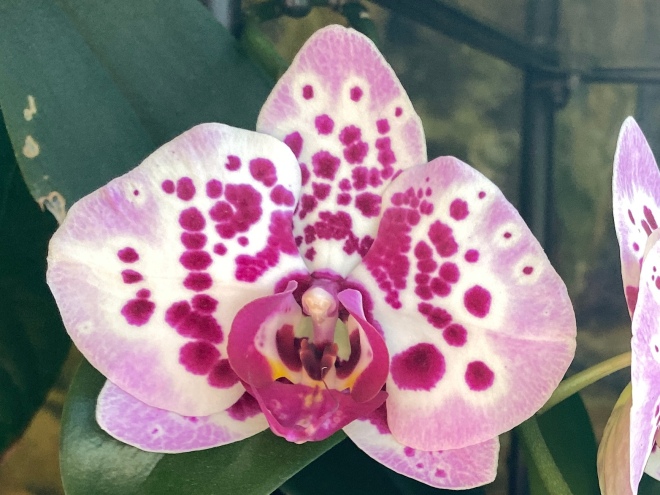 Of course, I can’t take all the credit, but after some reading, I’ll let you know what I did right. I moved the orchid close to a window that receives filtered light. There are other plants in the corner, which help create humidity. I stopped watering with my watering can and let a few icecubes melt on the surface instead. Orchids need oxygen at the roots and they don’t like sitting in water.

Those small changes paid off in a big and beautiful way.

My next project will be trying to revive an African Violet. Our foster kitten sat on it. That said, Little Bit went to her permanent home in early January and the violet is still hanging on.

Little Bit lounging as one does

October isn’t over yet, but my skeletal doppelgänger is putting her feet up for a spell.  That gnarly pumpkin is the perfect foot rest for her bone-weary feet.  Check out that gorgeous gardening apron, beautifully hand-made and gifted via Gjeometry’s Pay it Forward last year. Her seamstress skills are legendary along with her famous cat.

The original skeleton’s head is long gone, so I improvised with a plush pumpkin. A guest brought it to our boys Halloween party one year. Isn’t it a dream?

Ms. Doppelganger is holding a carrot that is just a few weeks shy of its one year anniversary. Somehow it escaped harvest, continued to grow, bloomed and just now went to seed. I’m amazed by nature’s gifts every day. 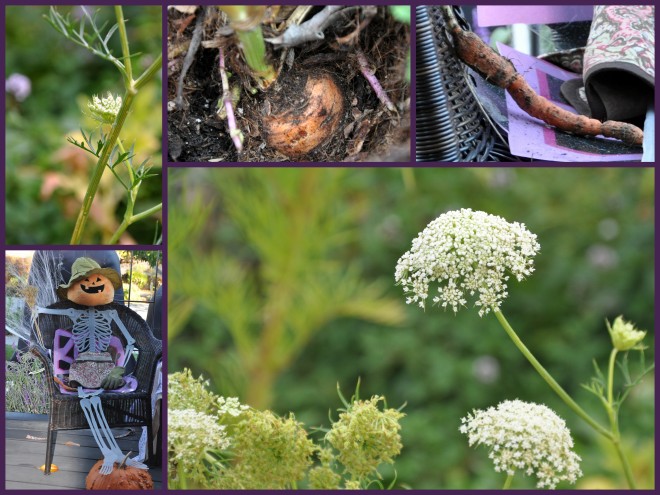 If you’ve been following my blog for a while, you’ve been reading about my (mostly) green thumb.  Here is a never-before-seen picture of the green thumb at rest. Are you suitably impressed?

We’ve left the rocking chair available for drop-in guests. If you’re feeling weary, please stop by, pull up a pumpkin and sit a spell. I’ll press a cup of steaming hot tea in your hand and we can shoot the breeze.

Please put your feet up and sit a spell

But my resolve is too.

I’ve never seen the iconic movie Napoleon Dynamite, but it was one of the suggestions for this month’s pumpkin dress up. I’ve done a frightful job creating this one. The darn wig refused to stay put. It was fun crafting a pair of glasses from a scrap of wire found in the garage. That said, I better stick to my day job.

Julia of Defeat Despair, thank you for the fun suggestion. I hope this makes you smile.