The heirloom tomato plants pumped out fruit all summer long. We ate them raw and in salads, sliced between sandwiches and Mike made the surplus into salsa. Oh yum.

Alas, tomatoes are a summer annual and they’ve come to an end. Here in the Northern Hemisphere,  fall is just a couple of weeks away. It’s time for the tomato swan song.

The plant is still pumping out fruit, but the lower leaves are browning and the fruit isn’t nearly as sweet.

I collected a huge bowl earlier this week, washed them and popped them in the freezer. We’ll be able to enjoy them in another salsa or sauce. I harvested some green tomatoes as well, and put them in a paper bag. If green tomatoes have released a gas called ethylene then they’ll continue to turn red. Otherwise they’ll remain green. The bag simply traps the gas and allows nature to follow its course.

Here’s an excerpt from Garden Know How:

Another factor  is the outside temperature. Tomatoes will only produce lycopene and carotene, two substances that help a tomato turn red, between the temperatures of 50 and 85 F. (10-29 C.) If it is any cooler that 50 F./10 C., those tomatoes will stay a stubborn green. Any warmer than 85 F./29 C., and the process that produces lycopene and carotene comes to a screeching halt.

Tomatoes are triggered to turn red by a chemical called ethylene. Ethylene is odorless, tasteless and invisible to the naked eye. When the tomato reaches the proper green mature stage, it starts to produce ethylene. The ethylene then interacts with the tomato fruit to start the ripening process. Consistent winds can carry the ethylene gas away from the fruit and slow the ripening process.

If you find that your tomatoes fall off the vine, either knocked off or due to frost, before they turn red, you can place the unripe tomatoes in a paper bag. Provided that the green tomatoes have reached the mature green stage, the paper bag will trap the ethylene and will help to ripen the tomatoes.

This year’s crop planted themselves. I call them ‘volunteers’, seeds unintentionally planted thanks to the wind or a bird dropping seed. They’re often the healthiest plants in the garden.  So while I’ve saved some seeds, I’m also lobbing the occasional tomato back into the veggie box, hoping they’ll plant themselves again next year.  Sometimes, a gardener just needs to get out-of-the-way. 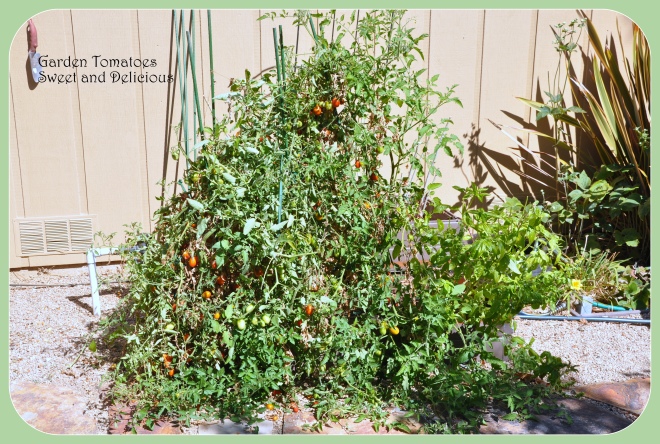 Tomato Plants: the long view Dear Reader, I wish you were here! This is a recent shot of my tomato plants. I’ve been harvesting tomatoes all summer long and putting them to good use. If you were here we could make a salad together while we caught up on our news. Until recently, that ugly pipe was hidden with cherry tomatoes. Just behind the tomato plants are the recently pruned raspberry vines. Let’s catch up soon. Cheers, Alys