Does this happen to you? I start telling a story in great detail, only to realize midway that I’ve told the story before. My friends are polite and would never interrupt. The “tell” is a patient look on their face, and I’m suddenly aware of my faux pas.

Conversely, I’ll assume I’ve shared a story, in the same great detail, only to have my friend say “this is the first I’ve heard this.” or “I had no idea.”

I’m a woman of a certain age, so I can chalk this up to the number of birthdays I have under my belt though I suspect I’ve been doing this my whole life.

Today’s post is about those little things I keep meaning to tell you, promises I made to “share in a future post” and just a couple of random things I would share if we could sit down together and share a cuppa.

Feel free to roll your eyes skyward if you’ve heard this one before. The magic of the internet is I’ll never know.

First up, my sister’s Halloween costume. Sharon based her costume last year on Pauline King’s gorgeous piece of art . I blogged about it last October.

Pauline King’s gift to my sister Sharon: The Wise Woman

I promised to share pictures of Sharon’s costume which turned out beautifully. We shared the same wig since we needed it on different days and she already had the hat and a simple black dress. I found the knotted walking stick (actually a cane) at a costume shop for $7 and had my husband saw off the hook. I bought her the cape, and as you see in the photo below, art imitates life which imitates art. 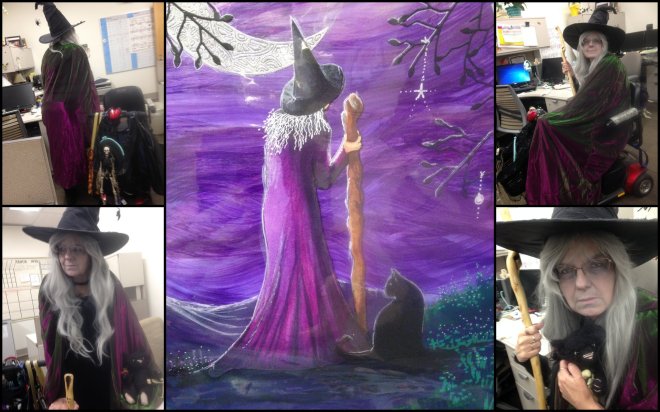 Next up is an unexpected blogging connection from my friends Dan and Rosie. After their older dog passed, my friends started looking at rescue organizations for another black Labrador retriever. Dan fell in love with black labs as a little boy when his dad snuck one into his room one night.

A few weeks into their search, Dan sent me a photo of them posing with a Golden Retriever named Ginger. (I’m pretty sure Ginger is also part horse). They missed having a dog so they expanded their search. I immediately recognized the bench they were sitting on because I’ve seen it often on Audrey’s blog.

That’s right; my friends adopted a dog from a rescue organization called Homeward Bound.  I’ve been followed Audrey’s blog for years. She’s a terrific writer and a good soul who helped revitalize the Memorial Garden featured in this photo and on her blog. You can follow along at Gardens For Goldens.

In the Homeward Bound Memorial Garden with Ginger

I’ve also been meaning to share photos of Mike sporting his beautifully woven scarves from fellow blogger Kerry at Love Those Hands at Home. Kerry and her husband took up weaving a few years ago, and now offer their wares on Etsy. She offered to make a couple of scarves for Mike so he could choose one, but he loved them both. The scarves drape beautifully, and are both soft and warm. Here’s Mike over a year ago wearing the two scarves sporting his before and after beard. We both had the flu, so shaving dropped off the list until he was well.

As I write this I’ve just finished a hot cup of Rooibos”tea“. We had multiple power outages throughout the night during a heavy storm but the power is back on and our fence is leaning but still standing. Lot’s of people are happy to replace the fence, but we can’t find a soul that will come and re-pour the improper footings. Twenty years ago we might have re-poured those fittings ourselves, but we’re not feeling it now.

Just one more share: Here’s  34 seconds of Tessa chirping at a flying insect near the window…

…and snuggling in to a pile of sheets on our bed.

Tessa snuggled in the sheets.

What would you share if we could sit down for a cuppa?

Are you following Kerry at Love Those Hands at Home?
If not, you won’t want to miss her sumptuous love letter to Autumn. Here’s an excerpt

Autumn seduces me, energizes me, makes me feel alive. My blood sings and fizzes like champagne when autumn comes to me.  – KerryCan

It’s a gorgeous piece of writing, and one that perfectly captures my feelings of the approaching season.

Even in California with our subtle, seasonal changes, the arrival of autumn is unmistakable. Breezes finally blow through the valley, chasing away the ugly smog. The last of the pumpkin vines shrivel and die, but not before gifting us their wonderful fruit.

Pumpkin vines, sending out their last bit of energy

This pair of beauties turned orange in July 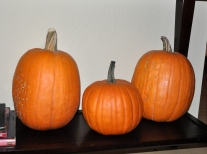 I love this pumpkin’s stem 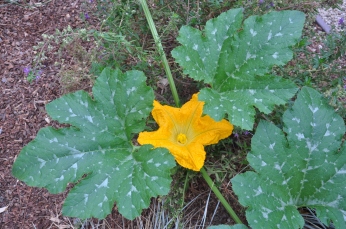 In bloom this week (male flower) 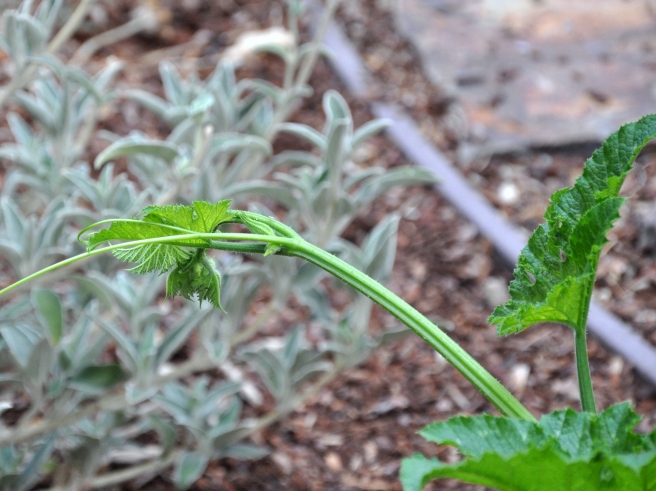 The tip of the vine from the first photo

Dusk settles in earlier, and for this fair-skinned gardener, working longer hours outdoors is no longer unthinkable.

I cleared out the back corner of the garden, pruning away overhanging limbs, dead leaves and the growing layer of pine needles.  Look at this pile?

After: I don’t have a good before, but you saw the pile (Slinky’s ears in the lower corner)

Ironically, the pumpkins I planted in May were a complete fizzle, while the self seeded (squirrel-planted) vines were a hit. One of those vines produced four tall, hefty carving pumpkins, ready for our resident, master carver (Mike).

A second vine produced one basketball sized pumpkin, took a rest, then pumped out a second pumpkin, turning a lovely shade of orange.

A third vine tip-toed up on us, producing a perfect little pumpkin the size of a cherry tomato. Then in the dead of night a critter ate it for supper.  Boo-hoo! But wait…another pumpkin eventually took its place and it too is turning orange.

Summer is far from over. Even when the autumnal equinox rolls around, we’re still in for a few more heatwaves. That said, the California Gray squirrels have stepped up their game, knowing intuitively what lies ahead. Indoors, Slinky is getting a head start on snuggle weather. She’s resting in my lap on a soft blanket, her coat still shiny on her diminished frame. 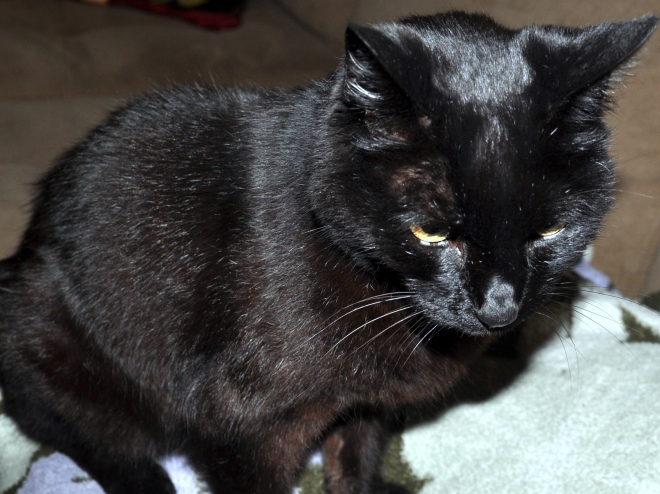 There’s an interesting conversation going on in the comment thread of Kerry’s post on the origins of  the use of the word “fall” vs “autumn”. Here’s what I learned:

Fall and autumn are both accepted and widely used terms for the season that comes between summer and winter. Some who consider British English the only true English regard fall as an American barbarism, but this attitude is not well founded. Fall is in fact an old term for the season, originating in English in the 16th century or earlier. It was originally short for fall of the year or fall of the leaf, but it commonly took the one-word form by the 17th century, long before the development of American English. So while the term is now widely used in the U.S., it is not exclusively American, nor is it American in origin. – Source: Grammarist

I love learning the origin of a word. While I know my Southern Hemisphere friends are looking forward to fall, how about the rest of you? Are you ready to say goodbye to summer and to welcome the ‘fall of the year’? 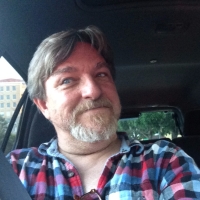