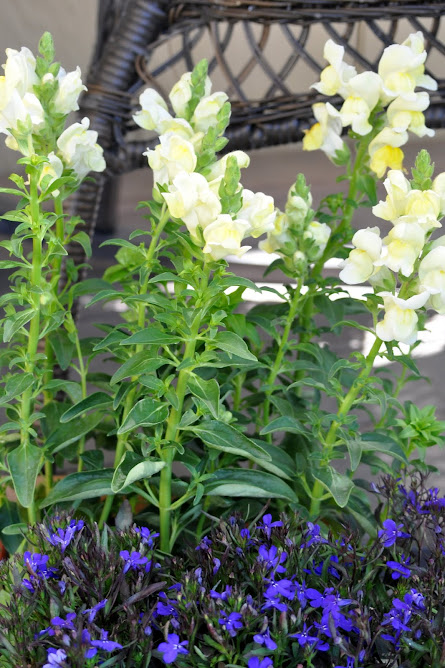 I’m sprucing up the garden this week.  My husband turned 50 today, so we’re celebrating this weekend with an informal party.  In honor of my Cal fan (Go Bears!!!), I bought a few annuals in yellows and almost blues, emulating his alma mater’s blue and gold.  I’ll plant them in a spare pot near the entryway.

I bought a fabric tablecloth (trying to use less plastic), but I need to make some modifications.  My sewing machine is on standby to bind the edges of the hole I’ll cut to accommodate the umbrella pole.

In my perhaps overly ambitious plans for the week, I bought fabric to sew a new cover for the garden swing.  I mentioned a few months back that my beloved swing was looking a little frayed at the edges.  Nothing like a party to light a fire under my procrastination.  JoAnn’s Fabrics had a 40% off sale on outdoor upholstery fabric so the timing was good.  I love the retro-1950’s style coupled with modern-day efficiency.  The fabric will resist water, mold and other outdoor perils while looking hip. 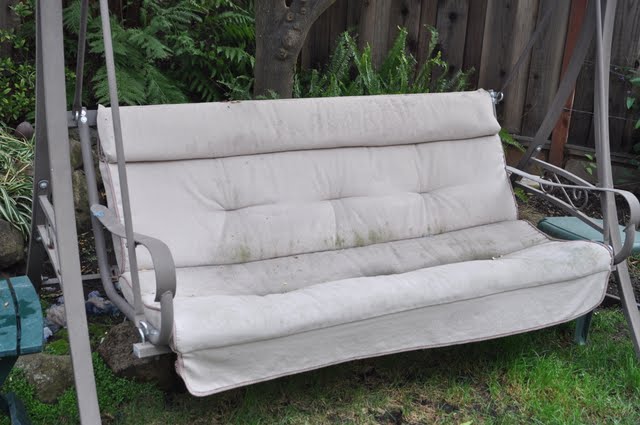 In need of some TLC

My readers know how I love my swing.  Sadly, it took a tumble in a wind storm, flipping heals over casters into the rock wall. The lower frame is sound, but that brief flight and subsequent landing tore one inch gashes into the canopy frame.

Before dismantling the canopy frame this winter, I thought it was simply bent and needed straightening.  Now that we’ve taken it apart, the mechanical fix is more complex.

The no-cost fix is simple: we’ve relocated the swing to the shady part of the garden, where it now rests under the orange tree.  Who needs an artificial canopy when nature has provided one in my backyard.

The seat cushions are a different story: they need a good overhaul.  I used an old, flocked table-cloth to cover the cushions off-season and it worked well.  Then spring rolled around and the neighborhood squirrels decided it would make excellent nesting material.   They had that cloth de-flocked in two days!   I get lazy in the colder months so between the unceremonious toss of the swing and the table-cloth dismemberment, I simply turned a blind eye.  Last summer I put a towel over the cushions, and made do with the bent top.  Neither one had any affect on my impromptu nap schedule.

Now that the yard is spruced up, my swing looks neglected.  It resembles a dorm room couch, minus the cookie crumbs, but with plenty of mold to give one pause.

Time to call on my sewing skills.  I’ll let you know how it goes.