I’ve been dying to say that for weeks: the rat has left the building.

If you want the full story, please read on.

Mr. Rat is not a family ‘pet’ but a wild rat brought indoors against his will by one of our cats. Apparently he’s a tenacious and good-natured rat, willing to make the best of life in our abode. If you’ve been following along since late last year, you’ll know of the varied and unsuccessful eviction attempts . If not, you can catch up here and here.

Mr. Rat knows how to enter and exit live traps with impunity. My rodent nemesis ate the proffered peanut butter, set off the trap, yet somehow remained on the winning end of freedom. 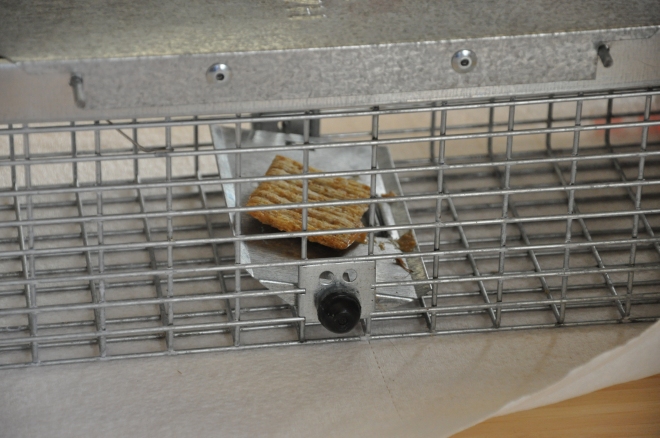 The peanut butter is gone but the cracker remains

At some point he moved into our entertainment center. It was warm and cozy there, so he started a nest sometime around Christmas. How else to explain the pretty colored paper shredded behind the receiver?

Mr. Rat hunkered down in the entertainment center

My husband Mike caught the rat between gloved hands during one of our attempts to liberate our furry guest. The rat squealed, Mike let go and another several weeks passed without a clue to the rat’s whereabouts.

Last week, Mr. Rat moved back to the entertainment center and I was sure victory would be mine. I had him cornered with the door flung open to the fresh air. The gentlemen from pest control assured me that the rat wanted to go outside.

After erecting a barrier blocking the living room and leading straight to the door, the rat apparently rounded the corner instead and disappeared. But…but…the door was wide open! This rat is terrible at following directions.

On the other side of the living room wall is a coat closet, a small guest bathroom and our laundry room. All sorts of new places to hide. Did I really leave the coat closet ajar?

After gingerly removing coats, tablecloths, shoes and the like, it was clear that I’d been outsmarted by Mr. Rat once again. All my rat-hunting time was up, so I reluctantly left the house for the rest of day. When I returned home, my temporarily rearranged furniture was there mocking me.

Then around supper time, Mouse the cat revealed a clue. Mouse showed a new fascination with the toilet in our guest bathroom, just to the right of the coat closet. Could it be? With my son’s help, we placed a mirror behind the toilet and shone a flashlight into the back opening. Nothing. Yet the cat’s interest persisted.

Oh Mr. Rat! This is no way to live. The garden has so many opportunities for growth and enrichment. Why would you want to hang out under the cold recesses of a toilet?

On the plus side, Mr. Rat had nowhere else to go. I made another impromptu barrier along the face of the washer and dryer. We opened the exterior laundry room door to the cool, fresh, inviting night air. Mike removed the water valve, unscrewed the entire toilet from the floor and lifted it skyward.

The ugly side of liberating a rat

The rat dropped to the floor. Did he run toward the door? Of course not. He ran toward the sink, now blocked, then ran straight for me where he circled my ankles while I stood there stock still. Then and only then did he run out the door into the night.

I ran after him with my camera but he made a clean get away, which is more than I can say for the mess he left.

At long last, The End.

40 thoughts on “Ladies and Gentlemen: The Rat has Left the Building”