It’s impossible to reconcile the death of a child. It’s equally challenging not to sound trite when you say to her mother, who’s been cut to the quick, “I’m sorry for your loss.” The loss is unimaginable.

Lauren died from pulmonary edema just a few weeks shy of her 19th birthday. We’re all in shock.

We’ve known Lauren’s family for a decade. She attended our Halloween parties, hung out with my son at the park, and was an occasional passenger in the back seat of my van. No single event stands out as extraordinary, but instead a collection of ordinary memories that can be stored and retrieved and enjoyed.

Of course, I assumed there would be many more ordinary days because that’s the natural order of things.

Lauren had an easy-going nature and a lovely smile. I remember greeting her near the bus when they returned from 5th-grade science camp and I remember the day they all graduated from high school. She was a good friend to my son and a joy to have in our home. I can’t believe she’s gone.

My heart goes out to all who loved her, especially Kimmy, Amy, and Bill. xo

The man who inspired my love of gardening died when I was a little girl. I remember the heat of the day, not unlike this one. When I flip the calendar to August, it may as well be 1969.

I hate August. I hate the smells in the air, the oppressive heat, and that burdening longing that ricochets around in my chest. I’m 52 years old and I miss Daddy.

As a girl, my grief went on forever. I performed a ritual each night before I went to bed: I would kiss his framed picture on the desk in our tiny two-bedroom apartment, and then I would touch his cane and the memory book from the funeral home. Only then could I fall asleep. I’m not sure why the artifacts from the end of his life had special meaning. Perhaps my young mind was trying to reconcile the impossible; that the man in the picture was gone.

Eventually I could tell people he died without falling apart, but then follow-up questions like “how did he die” would trip me up. At some point I crafted the self-contained sentence, “My dad died of lung cancer when I was 9,” incorporating the most oft-asked questions with hopes of putting all of them to an end.

When my at-home ritual and obsession became too much for my Mom, she got angry and threw away the funeral home book. I understand now that she was suffering from her own grief and profound loss, but her anger and frustration stung me. Perhaps it did help me move forward. I only remember the shame when she said, “you have to get over it!”

Grief isn’t linear. It’s impossible to chart its course. Who, more than me, wanted to get over it and move on?

My father’s death and burial were shrouded in mystery. I don’t know why no one took me aside to explain what was happening. One of the most poignant things my therapist asked me was “where were the adults?” One morning I woke to find that our frail father was taken to Peninsula Hospital in the middle of the night. I went with my mother for a “visit” but was not allowed into his room. I sat imagining all sorts of horrible things. Later I learned on the play ground from my older sister’s friend that Dad was in a coma. Finally Mom sat us down and said “your dad isn’t going to make it.” I made her say the words “your dad is going to die,” because I needed to know exactly what was going to happen. I went to sleep each night, telling myself that I wouldn’t cry when I learned he was gone. Ironically, when the news came it was true. A loss like that cuts you to the core. Tears eventually came, but on that early, hot and oppressive August day when I walked in on my mom destroying some of his papers, I simply called out “no.”

We didn’t attend our father’s funeral. I recall that either we were afraid to go, or my mother decided we were too young. She had been traumatized seeing her own father buried and wanted to protect us from the same. Whatever the reason, they are now part of family legend, with no surviving parties to corroborate.

In reality, trauma was piling on all around us. No one explained that he had cancer or what that meant. I didn’t understand that he was dying. I didn’t get to say goodbye to him, alive and weak in the hospital or graveside after he died. I thought I saw him walking down the street one day while riding the school bus home. I broke out in a cold sweat. I desperately needed to get home and tell my mother.

Unfinished business is exhausting. It follows you like your own shadow, lurking and ready to pounce when you least expect it. I’ve spent years in a therapist’s chair, on a yoga mat and in creative writing classes sorting this out. In the late eighties, with the help of a friend, I was able to locate my father’s grave. I went alone and wandered in the shade of the trees and took comfort in the tranquility. After that visit, I never felt the need to go back.

Yet here I am all these years later, continuing to write about Daddy.

I'm passionate about gardening, organizing, blogging and cats. I live in Silicon Valley, California with my husband of 23 years. We have two grown sons, but our feline family varies. The current count is three. 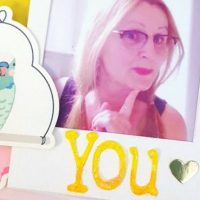