Who am I kidding!  This baby is huge!  Spider, arachnid, eight-legged wonder.  You can call it what you like, but these super-sized spiders make my hair stand on end.

I was enjoying a warm evening on deck with my hub,  when he pointed out this nocturnal spider. The spider’s web stretched from the house to the Magnolia tree, across the ramp leading to the deck.  By day, this arachnid must pack away her web, but once the sun sets, she’s open for business.

I say ‘she’ because my friend once suggested that I think of all spiders as female or as someone’s
mom making them appear less creepy.  I’m not sure it helped.

Spiders are great for the garden.  I’m delighted they’re here and appreciate the good work they do, reducing the non-beneficial bug population.  It’s just that I prefer they do it when I’m not looking. 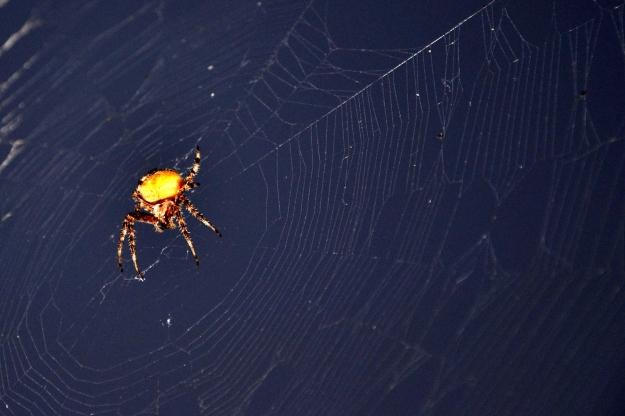 The birds aren’t the only ones laying eggs this time of year. I happened upon a newly hatched ‘family’ of spiders today.  I put family in quotes, because honestly there were hundreds of them. They look big in the pictures, but they are as small as a pin head.

I was clearing dried leaves around the orange tree, tossing them into the compost bin. As I reached for a dried branch, I saw what looked like tiny flowers caught in a web. The ‘flowers’ however, were moving in different directions. Good thing I withdrew my gloved hand when I did. Our neighbors would have heard me scream like a B movie actress in a horror film.

Ferns under the orange tree 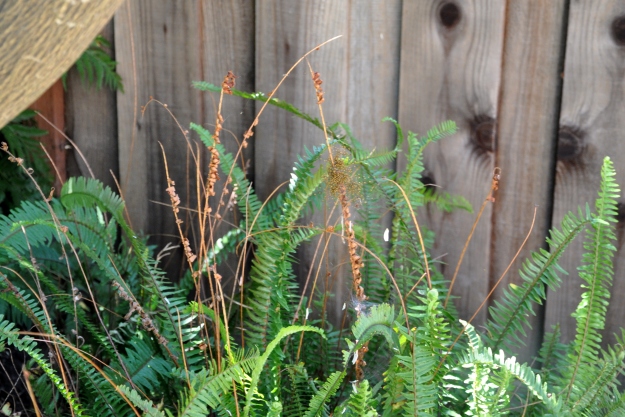 I grabbed the camera and took several shots.  Video would have been better, but I’m still not well versed with this camera.

Lindy came over to investigate.  It’s not every day she finds me sitting in the ferns.  Once I  turned the camera in her direction, she went all feline on me and gave me the cold shoulder. 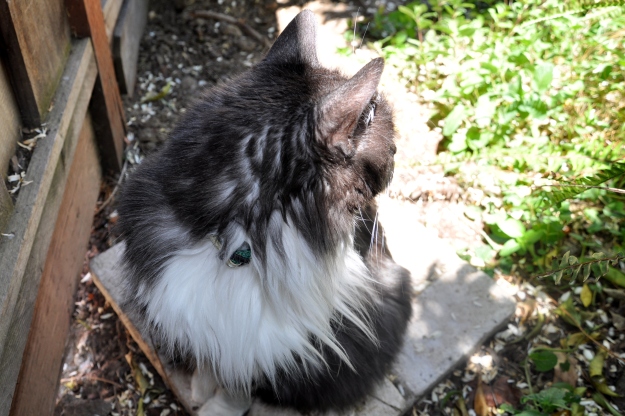 I have an interesting relationship with spiders.  Indoors, they creep me out.  I humanely remove them with my spider-catcher, and set them loose in the garden.  Outside, unless they’re bigger than a quarter, I’m usually okay with them.  When startled, however, I freak out.  It’s the strangest thing.

How do you feel about spiders?  Are you indifferent?  Did you pass out at the first photo?  Or are you as fascinated with nature as I am?  Maybe all three.