My house is super clean which can only mean one thing. I’m procrastinating.

The decorations are down and the house is back in order. The sun is shining. I’m all out of excuses.  It’s time to tackle the Magnolia Scale. Blech!!!

Last summer we discovered a severe scale infestation on our Tulip Magnolia.  It was everywhere!  I removed numerous branches, perhaps close to a third, since the infestation was so bad.  We ordered beneficial lacewing eggs, hoping they would finish off the rest.

Now that the tree is dormant, it’s easy to see what remains.  Though not nearly as bad as last year, dozens of red scales (the adult female) along with the immature male and female nymphs, cling to the young branches.

Today, with my bucket and gloves in hand, I spent an hour scraping off scale.  They’re easy to see (bright red) against the trunk, but I had to stand on a step stool to reach all of them.  After tossing them into a bucket, I went back with a warm, wet rag and wiped off the nymphs.

The overwintering nymphs are all over the tree!  There is no way I could get all of them, but I sure gave it a try.

After giving the tree one last look, I sealed the scale in a plastic bag for disposable, and soaked the bucket, rag and gloves in hot, soapy water.

Scale in a Bag

I’ll check on the tree again tomorrow, and if the weather warms up, I might take a hose to the underside of the branches to remove some more.

A graceful Acer hugs the side of our house; a stunning specimen of a tree. Long, green limbs branch out low from the trunk, giving way to seven-point leaves. It’s taller than our one-story house, and big enough to provide shade.

As much as I love the changing colors this time of year, I also feel a little wistful. Though we left Ontario, Canada when I was 7, I feel a cultural tug to my Canadian heritage.  Shorter, cooler days and the lovely hues of fall make me a little homesick for my place of birth.  Crazy, eh?

Our maple tree is an Acer palmatum, also known as a Japanese Maple. In our arid climate, home to year round citrus trees, the Acer serves as a lovely demarcation of the four seasons. In the spring and summer months, it offers shade for the patio.  It shelters part of our living room from the blaring summer sun.  I can see the tree from our bedroom, entry way, living room and of course the garden. Hummingbirds rest on the branches, waiting for a turn at the feeder.  Cheeky squirrels hide their nuts in the ground under the tree’s canopy. Just yesterday two of the cats took turns sleeping under the tree.  Who knows what that was about. 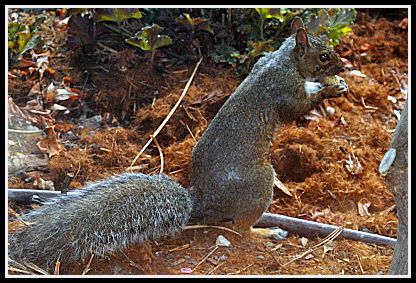 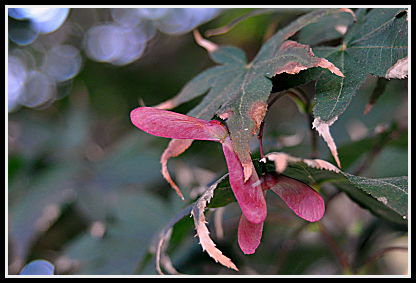 Now it’s autumn’s turn in the spotlight.  Leaves are changing to more vibrant hues. The fruit, known as samaras, populate the tree.  Since frosts are rare, our Acer holds on to its leaves for quite a while.  Last year, with so little rain, the dead leaves clung to the branches well into winter. You could see all the new leaf buds forming at the same juncture.  Occasionally I gave the tree a gentle shake so I could enjoy the rustle of crisp leaves scraping past the branches in a graceful free-fall.  It’s a gorgeous specimen, year round, but in these early fall days, it reminds me of a place I used to call home. 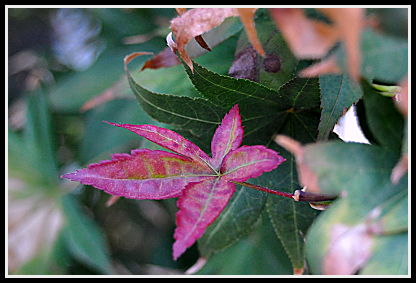 The first of the Acer leaves turn red