It’s such a clever hashtag, one that if you weren’t in the know might evoke thoughts of summer picnics, trips to the beach or as a way to tag your 4th of July, Independence Day photos.

Instead, Families Belong Together is a response to the current administration’s desire to stop immigrants from crossing our southern border. Instead of compelling Congress to act on a comprehensive immigration bill, the administration has implemented what’s known as a “zero-tolerance policy” of arresting anyone crossing the border without papers. Many of these border crossings are families seeking refuge from violence and political unrest. Some have traveled for up to a month with young children, looking for a better life.

This Administration’s response: Arrest the parents, then immediately separate *families* from their children.

Let that settle in. 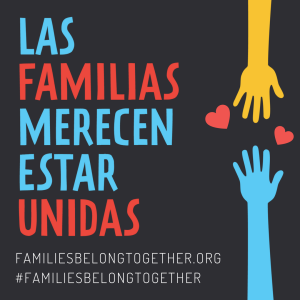 Spanish version of Families Belong Together

Authorities place parents in detention centers, immediately separating them from their infants and small children. Traumatized children are placed in a separate detention center, sometimes in another *state* with no understanding of why. Images of children sleeping on the floor covered in mylar blankets have evoked outrage. Footage of crying children, desperate for their mother have all but the hardest-hearts weeping along with them. Comparisons to Japanese interment camps and Nazi Germany abound.

I attended a Families Belong Together rally this past weekend and have found solace in numbers. There were over a thousand people at the San Jose rally on Saturday, a hot, windless, mid-day gathering. Throughout the country thousands of people rallied in over 700 locations. Rallies bring people together, spread the word, and offer resources for ways to help.

I’ve also been finding temporary respite from a steady hum of depression by volunteering at Lifted Spirits, a program for homeless women in San Jose. When I’m busy and engaged helping others, it helps me feel less overwhelmed. Spending time at Lifted Spirits allows me to positively impact someone else’s life without being swallowed whole by a situation I feel powerless to change. I’ll share more about their mission in a future post.

If you’re also feeling overwhelmed, here are a few resources…

Colorlines published: How You Can Support Detainees with a number of helpful resources.

…and a few inspiring words from MoveOn.org:

“More than 180 partner organizations came together to pull this off, including MoveOn, the National Domestic Workers Alliance, the Leadership Conference for Civil and Human Rights, the ACLU, faith groups such as Sojourners and the Presbyterian Church, Avaaz, the Southern Poverty Law Center, and a range of labor unions, the YWCA, scores more tremendous allies and partners, and countless local groups in cities large and small, united across lines of ethnicity, race, national origin, and language.

When you feel alone, when it’s all too much, remember that what is possible when we come together. That there is power in our numbers.

In the decades to come, people will ask themselves and each other what they did to fight the darkness at this moment in history.

On Saturday, many of us summoned a piece of an answer. We were in the streets. And we won’t stop until we turn the darkness back.”

Here are a few pics from our San Jose Families Belong Together rally.

53 thoughts on “Families Belong Together”

Leave a Reply to Born To Organize Cancel reply