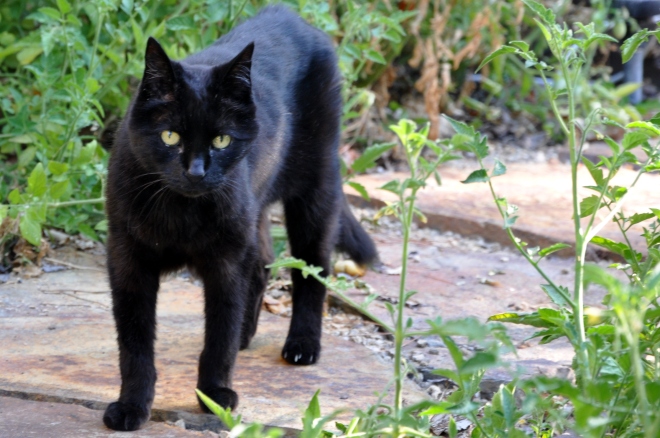 Our little Slinky has a sordid past. We don’t know the details, but she arrived on our front steps a few years ago with fear in her eyes, looking for a meal. I reached down to pet her and she lashed out, biting and clawing my hand. Boy did that hurt.

My family quickly learned to keep our hands to ourselves. Slinky visited our deck every few days and we offered her food and water on her visits. She started rubbing up against our legs with a nervous purr, but any attempt to pet her sent her scrambling, biting or both. This went on for months. Then one day, my son simply bent down and picked her up and carried her into the house. She froze in his hands, clearly terrified, but I rejoiced knowing we could get our hands on her. In November of 2010 I lifted her into a cat carrier and took her to our vet. 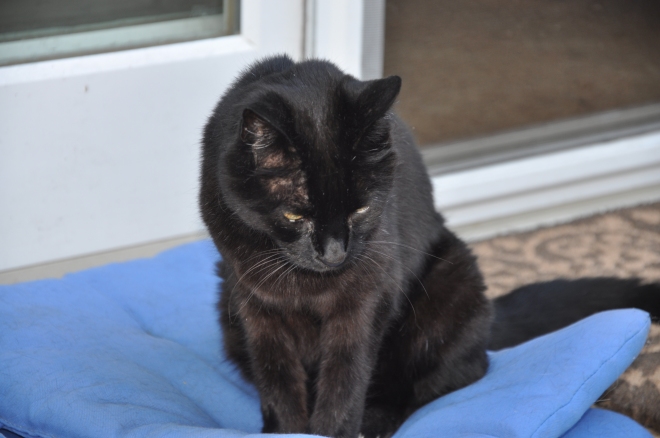 I warned our vet about Slinky’s propensity to bite and claw, but they countered that she was a sweetie. Clearly they’ve seen it all. Her health checked out, I paid for boosters and an exam and came home.

We kept Slinky indoors that first night, but with a small house, two boys and at the time, four other cats, she was under great duress. The eventual compromise was to create an outdoor enclosure in our back, side yard. This kept her safe from the dangers of the street, including cars and cat fights, but we still dreamed of having her inside.

We’ve come a long way since those early years. About two and a half years ago, and on her own terms, Slinky moved indoors. She sleeps on the back of my desk and keeps the other cats in line. She’s the smallest and the oldest and hearing-impaired, but Lindy and Mouse know to give her a wide berth. Slinky likes to dart outside for ‘fresh’ water, then quickly returns to her chosen spot on my desk.

When we cleaned out the side yard earlier this year, we tossed the decaying bench. I bought small blue cushions for the bench, and used to sit there to keep her company and to give her treats. The blue bench cushions were still in good shape, so I planned to use them on the back steps. As I tossed the cushions on the patio Slinky seemed to recognize them. She headed straight for them with purpose and intent. I wonder if she has fond memories of sitting on those cushions in her side-yard domain? Whatever it is, she’s spent most of her summer in this area of the patio known as the blue zone.

Life in the Blue Zone

Slinky wants to go out on the porch around 6 am.

A long, cool drink at the bowl

She has a long drink of water from her blue bowl, which is really a ceramic tray used to catch water under a plant. She spends the rest of the day on her blue cushions. 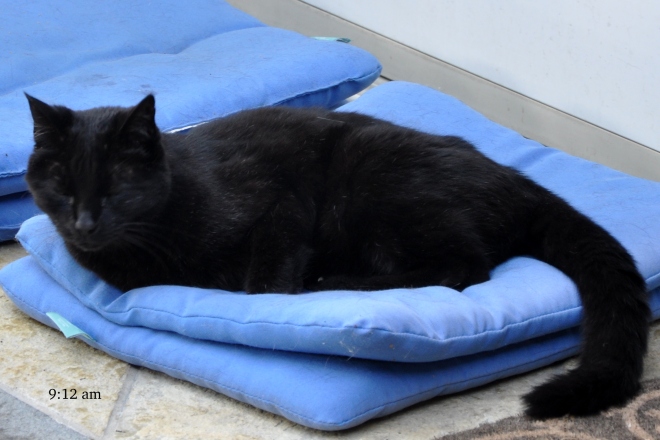 9:12 The first of several naps

On really hot days, she slips off the sides on to the cool stones, but by day’s end she’s back up on her cushions. 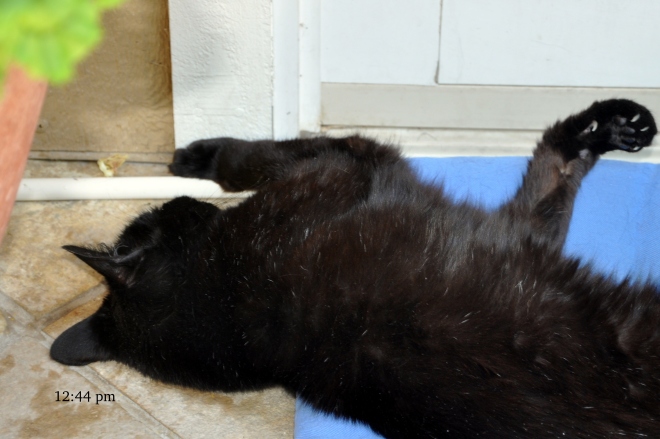 Another nap, resting her head on the cool stone 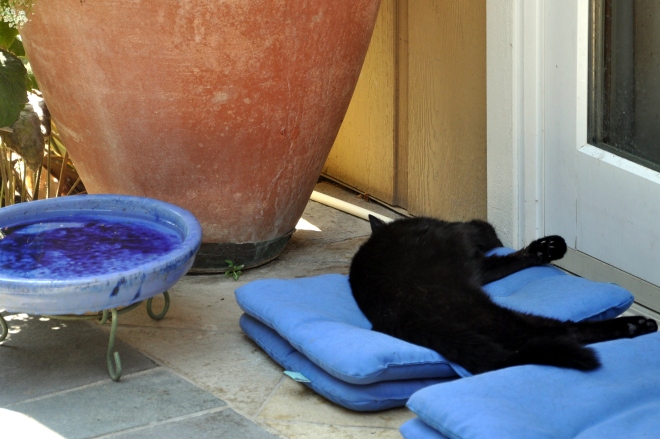 At dusk she comes inside and sits on the arm of the couch for a bit of TLC. She purrs and head butts and looks for affection, but we’re still a bit leery. One false move and the claws come out. A quick hiss follows, from a place of fear. Slinky recovers and things return to normal. Eventually we’re all off to bed until Slinky sounds the alarm the following day. She can’t hear so she dials up the volume to an impossible-to-ignore cry: GET UP! IT’S TIME TO RETURN TO THE BLUE ZONE!

Slinky is loud-mouthed, quick to temper and at times a bit of a bully.

A bit more about Slinky and the origins of her name 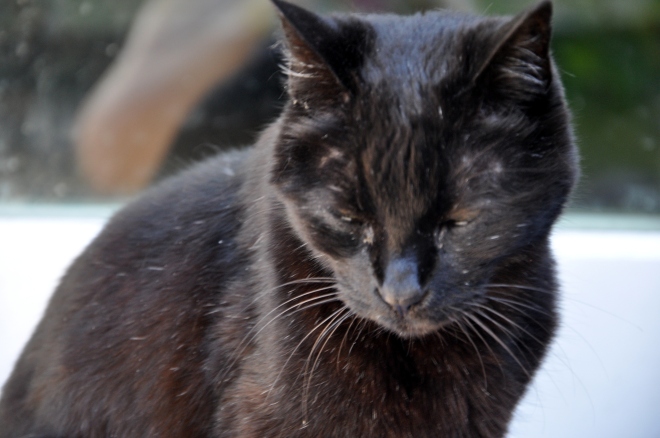 My old, graying Slinky. On a recent visit, my vet described her as “an old woman with really good teeth.”

28 thoughts on “Slinky Malinki: Life in the Blue Zone”