You witness life at a whole different level when you crawl around in the dirt.  I was up close and personal with the camera this week, taking pictures of the flowering catnip.  I turned to my left and caught sight of a snail, sliding its way up the side of a fern.  I took several shots, none of which came out, of the snail’s careful journey.  As the gastropod gained height, the fern slowly gave way.  Up and up went the snail, down and down went the frond.  Mesmerizing!  Eventually the snail’s green path dropped but the gastropod, undeterred, continued its ascent.  I backed up and saw the rest of his slippery group heading toward cool shelter for the day.

I felt strangely voyeuristic.  Inadvertently, I stumbled upon the secret hiding place of these unwanted helix aspersa.  I don’t like it when they snack on my garden, yet they seemed harmless and graceful as they slipped out of sight. A friend recently wrote an interesting blog entitled, Evolution: Escargot, Erotica, Empathy about her own awakening to the multitude of creatures that inhabit a French field.

It’s an interesting metaphor for life, I suppose: it’s easier to fear and hate what we don’t like or understand.  A little knowledge goes along way to level the (French) field. 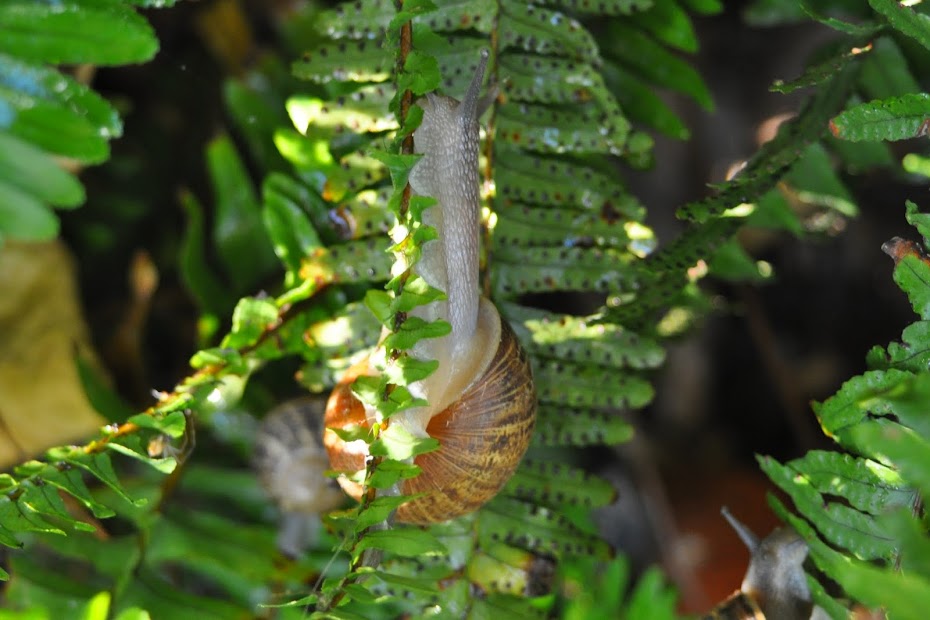