Well…turns out it’s really a duck.  Disneyland is known for its cast of characters: Mickey Mouse, his trusty companion, Pluto and larger than life Donald Duck. They’ve entertained children for over 50 years.  Can you guess my personal favorite?

That’s actually a trick question.  My favorite ‘character’ at the Magic Kingdom this week was, in fact, a duck.  Isn’t he cute? 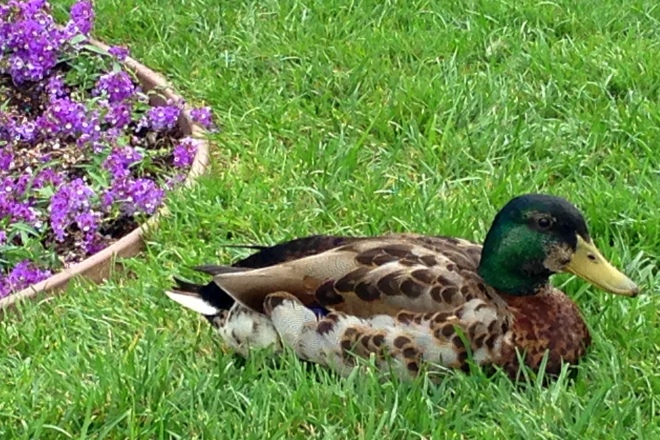 He put on a show for as well and *bonus* no line! He chased his female companions in a circle around the flowers, reminiscent of an old Laurel and Hardy movie. They quickly tired of his game and settled down with a weary eye. I wish I had video of the antics. We were in giggles.

According to my research, the Mallards are past mating season, so perhaps the chase was simply practice for next season.

We eventually glimpsed the official Disney characters along with a gaggle of five-year-old princesses. My 13-year-old male companions only had eyes for roller coasters, but even they slowed down for the Mallard show. Keeping it real at the Magic Kingdom is what makes this gardener smile.

Not much camouflage here

A pair of beauties