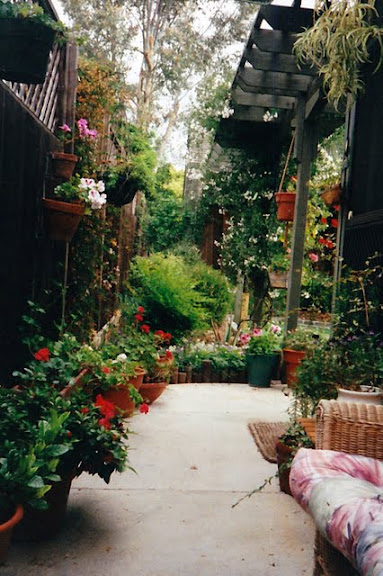 Hooray for spring which officially arrives on our coast around 1 am tomorrow.   Spring Equinox symbolizes the re-emergence of plants and trees awakening from winter’s slumber.  It also means longer lines at the garden center.

When I was single and working full-time I used to use some of my paid time off  each spring to start my garden.  It didn’t matter where I was living, I always found a way to break ground even if it meant settling for a patio garden.  When I rented a room in a house in Willow Glen, I planted in the three narrow strips lining the driveway.  My production was minimal in that miniscule plot, but the corn got plenty of sun, and I had the immense pleasure of gardening.

When the Willow Glen owner sold the house and gave us the boot, I moved to an apartment in nearby Campbell.  I managed to cram about 20 houseplants into my 400 square foot apartment, valuing greenery over any superfluous furniture.  As I set down emotional roots, so too did my garden expand.  I spent my weekends at local nurseries and assorted home and garden centers planning for my little patio.  One pot became three and eventually I lined both sides of the narrow walkway with potted flowers and plants.  I added vines along the fence, and even planted some zucchini behind my apartment, though I really didn’t have enough sun.  I planted flowers along the path to  my door, to the delight of my neighbors who shared the view.  The owners of our four-plex preferred simple cement.  It was nice to have a bit of green along the walkway, welcoming me home each day.

I married my husband in 1995 and settled in a quiet neighborhood, known for excellent schools.  It was important to both of us that we raise our boys in one place, having bounced around so much in our own youth.   I’ve enjoyed it immensely.  It took awhile to realize I could turn plants loose from their pots and allow them to put down roots.  I love the stability that allows me to plan a garden from year to year, not worrying about evictions or troubles from the city. My Campbell four-plex, as it turned out, was illegal.  It has since been torn down and replaced with a single-family dwelling.

Life is impermanent and change is inevitable.  But year after year, spring arrives, and along with it feelings of hope.    In the end, it’s not about yields but about the joy of the practice, the nuanced discoveries and the dirt under your nails.

What are you planting this spring? One thought on “Spring it On!”